Wagah border post: A nationalist shrine, or make that two 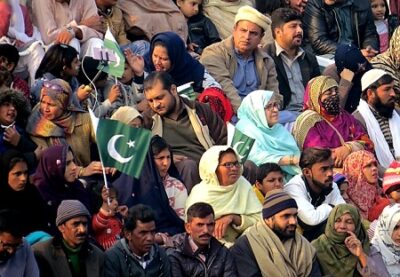 Wagah border post: A nationalist shrine, or make that two

At the border crossing in the Pakistani village of Wagah along the super militarised Pakistan-India frontier, a remarkable scene repeats itself every evening. Thousands of people from the two countries stream into giant stadiums built on either side of the border to hold raucous rallies, side by side. Egged on by animated cheerleaders and to a soundtrack of patriotic music, two competing parades in full military regalia culminate in the lowering of flags and bizarre acrobatic high kicks.

Pakistan and India share a history of conflict. Before the British who had governed both territories as a single colony, withdrew from the Indian subcontinent in 1947, they agreed to partition and split the Punjab region down the centre between the cities of Amritsar and Lahore. Over the years, disputes over religion and the divided Kashmir region have led to wars, cross-border conflicts and military stand-offs. Even today tensions between the nuclear-armed neighbours remain high.

Regarding the disputed region, Pakistan and India both claim Kashmir in full but control only parts of it. While Pakistani-administered Kashmir and Indian-administered Kashmir are separated by a mere armistice line, Wagah sits on the international border to the south between the Pakistani city of Lahore and the Indian city of Amritsar. Despite being outside the disputed region, the Wagah crossing has taken on a symbolic role in the conflict over Kashmir thanks to the daily military parades.

On the one hand, the joint border ceremony may be carefully choreographed but the underlying hostility is on full display here: after all, these two countries clearly don’t like each other, don’t trust each other and can’t cooperate on much else. In this context, the ceremony is a naked show of nationalism, both Pakistani and Indian. Nationalism requires an other and the two countries are performing their soldiers’ elaborate fast-paced marches and high kicks to keep the hostility alive.

On the other hand, the overzealous ceremony can be interpreted positively as a sign of unity between the two countries despite the tense relationship. The dance-off between the two nuclear-armed militaries shows that Pakistan and India can overcome their differences and come together every evening for a brief moment to fold their flags and shut the border for the night. It’s a powerful show of pride, which draws attendees from both sides of the border as well as foreign tourists like me.