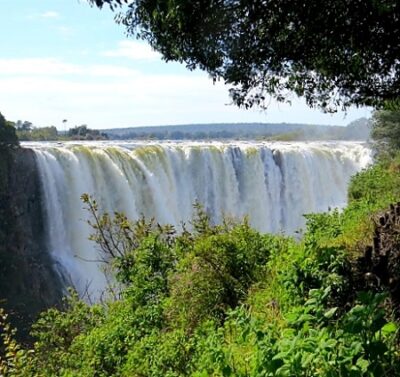 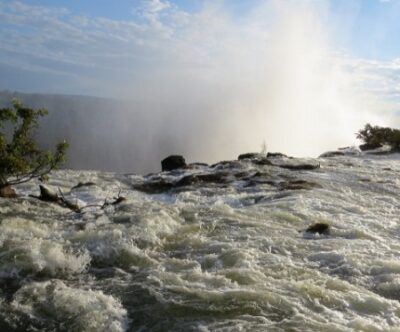 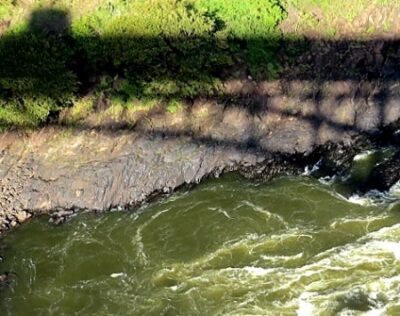 They say the mighty Victoria Falls is worth crossing Africa for, so swinging between Zambia and Zimbabwe, both of which this natural wonder straddles should go without saying. Approaching from either side, you’ll hear the falls long before you see them: a rumbling roar that explains their local name of Mosi-oa-Tunya or The Smoke that Thunders. A magnet for tourists since before mass tourism even started – from backpackers to bucket-list pensioners, this unbridled force of nature never disappoints.

This mile-long curtain of tumbling water, made up of several waterfalls on the Zambezi River, is the world’s largest. While it’s neither the highest nor the widest waterfall, based on its combined width of 1708 metres and height of 108 metres it’s the world’s largest sheet of falling water by volume. Victoria Falls is roughly twice the height of Niagara Falls and well over twice the width of its Horseshoe Falls. In Africa, its closest competitor – Kalandula Falls in Angola – is 400 metres wide and 105 metres high.

“At this point, you have already given up on staying dry and are beginning to enjoy the idea of standing, fully clothed, under a shower running at full blast”

The Smoke that Thunders is essentially the spray from the falls which rises to a height of over 400 metres and is visible from up to 48 kilometres away. It originates from the contact of all that gushing water with the base of the gorge from where it pelts upwards like inverted rain. During the rainy season, the Zambezi is in full flood and the foot of the falls and most of the curtain are shrouded in permanent mist. This huge plume of spray won’t only blur your vision but will also get you soaking wet.

If this is your thing, head straight to the Zambian side of the falls. While the bulk of Victoria Falls is obscured from here, this is where you can get closest to the water. Key to this experience is crossing the Knife-Edge Bridge which is a heart-stopping stroll along the edge of the precipice. Also on the Zambian side is the Boiling Pot. This is a permanent whirlpool where the two streams of the Zambezi meet below the falls. Anything swept over the falls is washed up on the banks of the Boiling Pot.

The sheer size of Victoria Falls – or some three quarters of the face of the waterfall – is best appreciated from the Zimbabwean side. Sticking out of the dripping rainforest along the walking edge here are numerous viewpoints, each with its own special angle. The effect is mind-boggling: you can’t quite comprehend where so much water is coming from. At this point, you have already given up on staying dry and are beginning to enjoy the idea of standing, fully clothed, under a shower running at full blast.

Linking the two sides is the Victoria Falls Bridge, a sight in its own right. Built in 1905, the 198-metre long and 128-metre high iron bridge was prefabricated in England and assembled on site. It’s the brainchild of Cecil John Rhodes as part of his unfulfilled Cape to Cairo railway route. Even though he never saw the falls and died before any work on the bridge began, Rhodes wished to “build the bridge across the Zambezi where the trains, as they pass, will catch the spray of the falls”. Mission accomplished.