Veronese’s take on the Battle of Lepanto 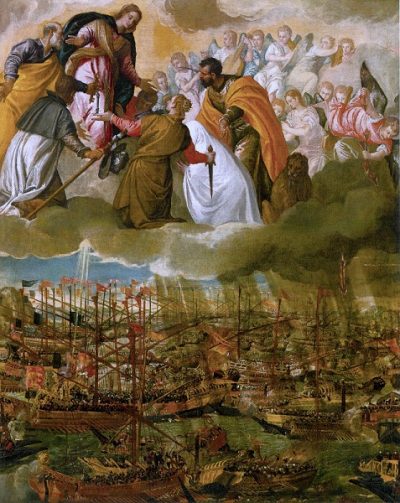 Veronese’s take on the Battle of Lepanto

This relatively small picture, The Allegory of the Battle of Lepanto by Paolo Veronese of the San Sebastiano fame, was originally painted for the church of San Pietro Martire on Murano but it now hangs in the Accademia. Despite its chamber size, the painting gives the impression of a monumental work and is a famous representation of the legendary battle. Fought in 1571, the Battle of Lepanto was bought between the Holy League composed of various Christian states of Europe and led by the Republic of Venice against the Turks who lost.

As such, it was a symbolic victory of the cross over the crescent and it dispelled the myth of the Ottomans’ invincibility. Some historians assert that a Turkish victory could have led to Western Europe being overrun by Islam, as had happened to the Byzantine Empire a little more than a century earlier. Historically speaking, the Battle of Lepanto was also the largest naval battle in Western history since classical antiquity, involving more than 400 warships on both sides, and the last great battle to be fought between rowing vessels.

The Christian victory in the battle had great resonance in Venice, since it followed the devastating defeat of Cyprus a few months before, during which the Venetians, besieged by the Turks, were all killed and the island that had long been a Venetian possession was passed to the Ottoman Empire. The victory at Lepanto was subsequently and repeatedly depicted by Venetian artists as an independent historical picture, often as an allegory as is the case here with Veronese, or it served as a backdrop to portraits. Sometimes it even appeared on the canvases indirectly.

At the centre of the painting, Doge Sebastiano Venier, kneeling, is thanking Jesus who blesses him, flanked by St Mark – the patron saint of Venice, and Santa Giustina who is celebrated on October 7 – the day of the battle. Behind the Doge is the commander Agostino Barbarigo who died heroically in the fighting. There are also two female figures on the right side, one is an allegorical representation of Venice, holding the Doge’s horn to mean that his power comes from the people, and on the left a figure in white holding a chalice – the personification of the faith since this was a holy war against the infidels.

In Venetian iconography, the Battle of Lepanto is the stuff of legend as can be seen from numerous artistic allusions to the event throughout the city and in its storytelling. It has been documented that even after the battle had clearly turned against the Turks, groups of Janissaries still kept fighting their Christian adversaries with all they had. It is said, with less historical accuracy, that at some point the Janissaries ran out of weapons and started throwing oranges and lemons at their Christian adversaries, leading to awkward scenes of laughter among the general misery of battle.

Stylistically, this painting cements Veronese’s reputation as the last of the golden age of Venetian painters. Known as a supreme colourist, Veronese’s skill in this regard is on full display in The Allegory of the Battle of Lepanto. After an early period with Mannerism, Veronese gradually developed a more naturalist style of painting. This transition is visible in this late work of 1572 – the allegory in the top part of the picture is almost devoid of the pomposity associated with Mannerist works and the battle in the bottom plane is naturalistic to the hilt.