Venice’s only Rubens: Sacred or profane? 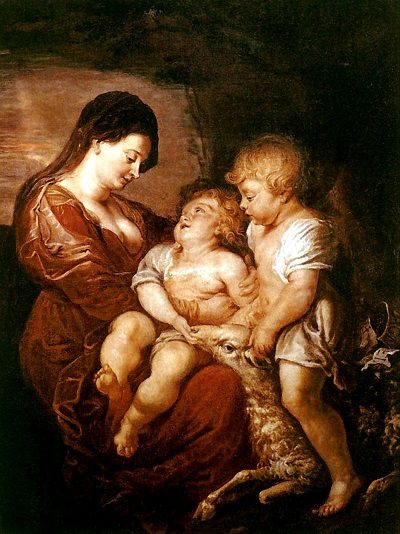 Venice’s only Rubens: Sacred or profane?

In Venice even the most obscure church hides a big-name masterpiece. At Santa Maria del Giglio, a riotous Baroque church, the already high expectations of finding a masterpiece are exceeded handily: there’s a Rubens and the only one in Venice at that! The Virgin and Child with the Infant St John hangs in the Molin Chapel as a left-behind from the artist’s stay in Italy between 1600 and 1608, although it is unknown who ordered the commission or where it was originally placed. This is an erudite composition from this Flemish Baroque artist whose style emphasises sensuality and colour. Rubens did paint altarpieces in addition to portraits and mythological subjects within a vast body of work.

For all its artistic value, the painting is an odd cut-and-paste job with only the central section, unusually on paper, being Rubens’s work. This is affixed onto canvas and integrated into a generic background comprising a tree and curtain hanging on the right, all of it by a late 17th-century painter, probably a local from the Veneto. The painting has also suffered extensive damage during a fire and the restoration work, if one can call it that, contains many imperfections, including the use of inappropriate colours. This seems to have been a common practice at the Giglio as another painting, Tintoretto’s Christ with two Saints in the north aisle, has also been damaged by inexpert restoration.

Despite the painting’s obvious vicissitudes over the centuries, there is no lack of elements substantiating its authorship or high quality. There is an emotional intensity to all characters, the freshness of tones – especially the Titian-style red, the material richness and the expert technique. Deep layers of glazed lacquer are superimposed, often tone on tone, and finely touched. Then there is the skillful painting of every element in the work. The power of invention is evident in the small patch of sky. The facial features and breast of the rather fleshy, Rubenesque Virgin are portrayed to great plastic effect as is the entire placement of the three figures and the overall composition.

Curiously, at least some of the painting’s controversial retouching was done in the interest of public decency. The picture was considered profane, as in the original the Virgin showed both of her breasts and the child’s genitals were visible right at the centre of the composition. As a humanist, Rubens was a serial painter of nudity, especially of women whom he preferred voluptuous and depicted in highly sexualised contexts. Baroque sensuality, after all, was one better on Renaissance humanists who defended nudity in art by equating bodily perfection with heroism and virtue. But the use of the nude in art, particularly religious art, was still controversial during the Renaissance and beyond.

The allegation was that by depicting her nude or semi-nude, artists would challenge the values associated with the Virgin. In the 17th century, the Catholic Church formalised its stance on nudity in art with an edict demanding that “figures shall not be painted or adorned with a beauty exciting lust”. The clergy began a crusade to camouflage the private parts and sometimes breasts visible in artworks across Italy. The coverups included fig leaves or garments. The overzealous restorer of the Giglio Rubens who veiled one of the Virgin’s breasts and cover the child to bring the profane back to sacred may have been part of this campaign – one of history’s most significant acts of art censorship.