Venice and the popes: From equals to heretics 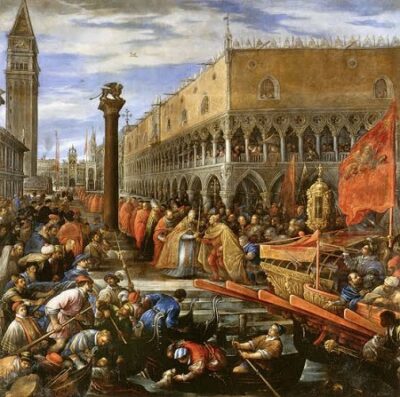 Venice and the popes: From equals to heretics

Throughout its history, Venice was often at odds with Rome and in each instance it acted autonomously. One of its founding principles was the state’s control over all religious matters within its reach. This was rooted in the legend of St Mark which maintained that Christianity was brought to the lagoon by the saint himself, giving Venice the same prestige as St Peter had given Rome. Venice’s idea of separation between church and state was the separation between Rome and Venice itself.

Venice’s religious autonomy received a boost from Pope Alexander III in 1177 through its role in mediating a peace between Frederick Barbarossa, the future Holy Roman Emperor, and Rome. For Venice, the treaty assumed mythical proportions and an exchange of gifts between the pope and Doge Sebastiano Ziani was interpreted as recognition that the pope, the emperor and the doge were equals. This declaration would cement Venice’s independence from the authority of Rome.

Over time, the Venetian Senate passed laws that would increasingly assert the religious and political independence of Venice from the church of Rome. Venice, for instance, mandated that clerics couldn’t hold public office or participate in Venetian politics. Venice also demanded that erecting any church building or bequeathing one’s estate to the church as a final act of penance must be approved by the state. Clerics would similarly be subject to the same laws as laypersons.

In practice, such degrees led to frequent friction between Rome and Venice. In 1202, for example, the Venetian siege of Zara during the Fourth Crusade led Pope Innocent III to excommunicate the army. In 1284, Pope Martin IV imposed an interdict because of Venice’s refusal to support a crusade. In 1308, Pope Clement V sanctioned Venice for its capture of Ferrara as did Pope Julius II in 1509 during the War of the League of Cambrai to further the papal cause in war in the Romagna.

The most notorious was the papal interdict of Venice in 1606 – the last excommunication in history of an entire state. It was caused by Venice’s decision to prosecute two monks accused of rape and murder in a civil court. Doge Leonardo Donato saw Rome’s reaction as a political tool to force Venice into compliance with the pope. Since the pope had no political authority in Venice, the excommunication was invalid and all religious services continued under the authority of the doge.