Venice and the Mamluks: Slaves to spices 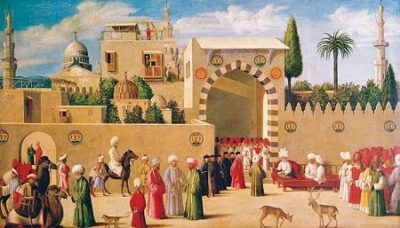 Venice and the Mamluks: Slaves to spices

For 300 years from the mid-13th century, the Egyptian Mamluks were a force to be reckoned with. These slave-warriors of medieval Islam who overthrew their masters, defeated the Mongols and expelled the last of the Crusaders from the Holy Land also took charge of the long-distance spice trade. As the new middlemen to control the movement of goods by land and sea, they linked Cairo – their capital and, with 200 000 people, the greatest metropolis of its age – with Europe, naturally via Venice.

In the late 12th and early 13th centuries, Mamluk regiments constituted the backbone of Egypt’s military under Ayyubid rule. In time, these slave soldiers, mostly Turkic-speaking peoples from the Caucasus and the Balkans, grew into a knightly military class which eventually challenged the Ayyubids, their masters, to establish a military-controlled sultanate that ruled the present-day Egypt and Syria. Mamluk rule lasted three whole centuries until first Syria and then Egypt fell to the Ottomans in 1516.

As purveyors of spices and metalwork, the Mamluks mattered to the Venetians. Venice would seek privileges for its merchants to become the Mamluks’ main trading partner in Europe. Mamluk cities had Venetian diplomats with access to local authorities. Ties between the Venetian oligarchs and the Mamluk court were solid. Reception of the Ambassadors, the famous canvas by the workshop of Gentile Bellini now in the Louvre, depicts the governor of Damascus granting an audience to Venetians in 1511.

As a result of this trade, a dazzling array of goods – spices, textiles, metals, medicines, pigments, precious stones, glass and paper – travelled in both directions. Mamluk trade and, in some cases, artistic influence shaped the demand in Venice for Islamic-style bookbindings, the development of inlaid metalwork and the fascination with Mamluk attire in the Venetian painting of the day. After 1516, trade between the former Mamluk Empire and Venice continued, but under the auspices of Ottoman rule.

In the 1490s, the Portuguese expeditions around the Cape of Good Hope undercut the Venetian monopoly on spice trade and prompted Venice to intervene. In an effort to eliminate the Portuguese challenge, Francesco Teldi, a Venetian trader and ambassador, encouraged the Mamluks to block Portuguese navigations in the Indian Ocean. In the end, the Portuguese trade triumphed and the Mamluks were overrun by the Ottomans whom the Venetians adopted as their new trading partners.