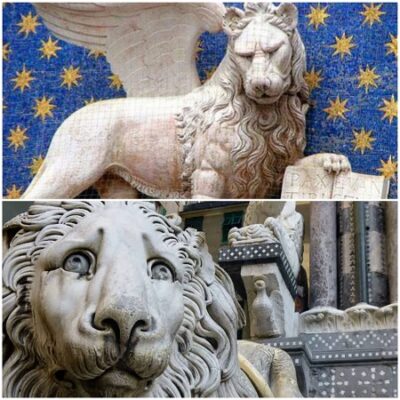 Perched on the opposite sides of the Italian peninsula – Venice at the head of the Adriatic Sea and Genoa in command of the Ligurian and the Tyrrhenian Seas – the two city republics gradually grew into maritime powers in the 1100s and 1200s. A clash over trade routes in the eastern Mediterranean soon became inevitable. The struggle for exclusivity in various markets, including Constantinople, erupted into four exhausting and ultimately inconclusive wars in the 13th and 14th centuries.

Unlike Venice, which uniquely among Italy’s chief cities, came into being after the fall of the Western Roman Empire, Genoa was an important Roman port founded in the 4th century BC. And unlike the original population of Venice which consisted of refugees fleeing Germanic and Hun invaders of the Roman towns and undefended countryside on the mainland, Genoa was invaded by the Ostrogoths and the Lombards under whom it existed as a town in quiet obscurity well into the Middle Ages.

Both cities initially developed as small centres, each building its merchant fleet and a republican government, to become two of Italy’s major maritime republics. Their fleets of ships existed not only for their own protection but to support growing trade networks across the Mediterranean. Both cities were essential in re-establishing contacts, both commercial and cultural, with Asia and Africa, which had been interrupted during the early Middle Ages. They both also played a key role in the Crusades.

The first military conflict occurred in 1255 in Acre, with the Genoese attacking the Venetian quarter. The Venetians won and maintained the upper hand until 1270 when a truce was mediated by Louis IX of France who needed both fleets to fight against Tunis. This campaign ended in failure and Genoa and Venice clashed in a second war of 1294-1299 which destroyed the Venetian fleet. This was when Marco Polo, fighting for Venice, was captured and wrote The Travels of Marco Polo in Genoese prison.

Fifty years of peace ensued, with the belligerents occupied by other challenges, including the Black Death. The third war of 1351-1355 began well for the Venetians but ended badly and since control of Genoa had passed to Milan, an ally of Venice, the Venetians negotiated better peace than expected. The fourth and final war of 1378-1381 threatened the very existence of Venice until a dramatic reversal of fortune when the Venetians pulled off a victory, often attributed to their superior civic spirit.