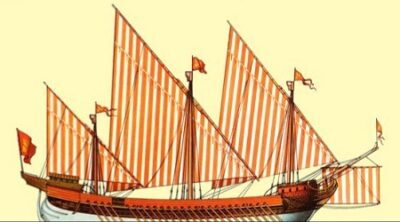 The relationship between Venice and Byzantium was always based on pragmatism. Once Venice achieved independence from the Byzantines in the 9th century and as it continued to grow as a trading power, commercial interests became the most significant factor that brought the two parties together but also pushed them apart as the circumstances changed. Trade also ensured Venice’s ongoing interest in Constantinople during the Ottoman era long after Byzantium had ceased to exist.

As the Venetians took the role of middlemen in trade between the east and west, Constantinople and the Byzantine ports of the eastern Mediterranean became part of their food chain. Byzantine merchants would bring luxury goods from the east to the markets of Torcello and later Venice and Venetian traders would then move them further west. The Byzantines would take payment in the form of salt or timber while Venetians would cash in on profits from further distribution of merchandise.

In 992 came the first military-commercial deal between the Byzantine Empire and the Republic of Venice, signed on behalf of the latter by Doge Pietro II Orseolo who began the period of eastern expansion of Venice that lasted for the better part of 500 years. The treaty obliged Venice to transport Byzantine troops when necessary in exchange for significant commercial privileges in Constantinople. While Byzantium was still in control of southern Italy, it now needed Venice to prop it up militarily.

Another trade and defence pact between Venice and Byzantium was signed in 1082 in return for Venetian help in the Byzantine wars against the Normans. The treaty increased Venice’s economic presence and status throughout the Byzantine Empire and established a permanent Venetian quarter in Constantinople. It’s been suggested that the massive loss of revenue the Byzantines suffered when they allowed the Venetians to trade tax-free ultimately triggered Byzantium’s terminal decline.

In 1171, this relationship deteriorated. Following a Venetian attack on the Genoese quarter in Constantinople, nearly all Venetians in the empire were imprisoned. A war ensued and the Venetians lost. The hostility lasted into the Fourth Crusade and the Sack of Constantinople. Commerce, however, resumed after the Byzantines regained control of their empire and, with the presence of Turkish merchants around the Fondaco dei Turchi in Venice, continued after the Byzantine era had ended.