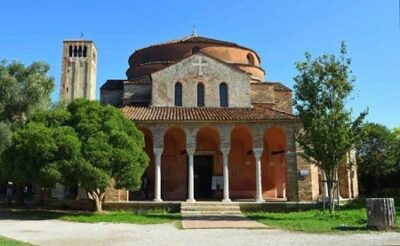 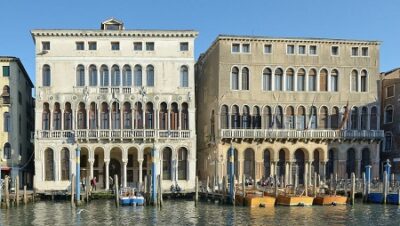 Several states contemporary with the Byzantine Empire were culturally influenced by it, without always being part of it. These included the Kievan Rus as well as some non-Orthodox states like the Kingdom of Sicily, which had been a Byzantine possession with a large Greek-speaking population until the 10th century, and the Republic of Venice, which separated from Byzantium in the 9th century. Constantinople with its grandiose and ambitious architecture naturally shaped the Venetian aesthetic.

Venice’s earliest architectural style is therefore a fusion of Byzantine forms overlaying a Latin Christian foundation. The few of the Veneto-Byzantine basilicas that remain feature exotic, high-riding domes and magnificent golden mosaics. Their segmented or hemispherical domes rest on pendentives with round arches to create vast open spaces, heightening the sense of grace and light. Their shimmering mosaics with their graphic simplicity likewise bring light and warmth into these churches.

One of the best examples is the Basilica of Santa Maria Assunta on the island of Torcello, which was once a centre of power in the Venetian Lagoon and the parent island from which Venice itself was populated. Built in the 7th century, it claims to be the oldest church in the lagoon. Its highlights are the ceiling with exposed wooden tie-beams and the mosaics, said to be the earliest in the lagoon. The basilica anticipates some of the features that were fully developed later in St Mark’s Basilica in Venice.

Venice’s famed St Mark’s Basilica is a copy of the church in Constantinople that no longer exists; therefore it’s now the real thing. In line with its prototype, its floorplan is a classic Greek-cross design with five domes, one over each of the four arms and one over the central crossing, with all of them resting on pendentives. Its monumental mosaics, the oldest of which were executed in the late 11th century by Byzantine mosaicists from Ravenna, are the quintessential Veneto-Byzantine decoration.

Unlike in Venice’s church architecture, in secular buildings the earliest Veneto-Byzantine style only survives in fragments. There’s Ca’ da Mosto – a 13th-century palace and the oldest on the Grand Canal – and close-by there’s the 14th-century Palazzo Loredan/Ca’ Farsetti duo. Only their lower floors are in Veneto-Byzantine, with the rest dating from later periods and styles. All of them are casa-fondaco homes where the ground floors served as merchants’ warehouses easily accessible by ships.