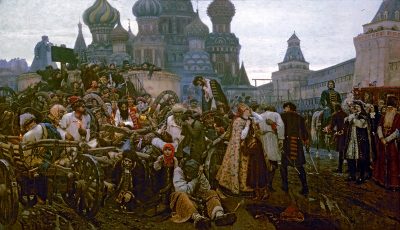 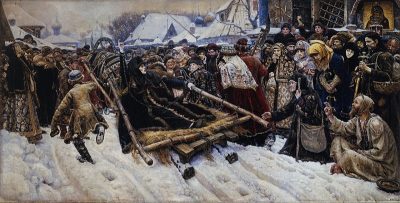 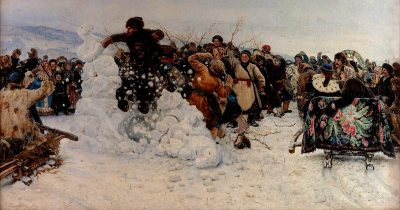 Vasily Surikov’s artworks, I’ve been told by several Russians, have become familiar to the general public in Russia through their use as illustrations in history textbooks. To a non-Russian like me but an avid reader of Dostoevsky, they give visual representation to the unique beauty of Russian life. Surikov’s depiction of large-scale subjects of Russian history captures the term ‘Russian soul’ that is melancholic, romantic, hardworking and slightly tortured, yet beautiful beyond Western comprehension.

Up until the mid-19th century, Russian art was almost exclusively based on portrayals of aristocracy and high-class society, with little to no relation to common people or their lives. This monopoly on artistic expression was challenged by Peredvizhniki – The Wanderers – a progressive art Society of Wandering Exhibitions from St. Petersburg which, as the name implies, organised travelling art exhibitions and eventually grew into an art movement that revolutionised Russian culture.

This art movement, popularised by the Realist works of Ilya Repin, also included Surikov. Unlike the world-famous Repin whose depictions of the contemporary peasant and working classes are overflowing with social agendas centred around emancipation of the serfs in the 19th century, Surikov is a Realist painter of important events from Russian history which he skilfully combines with symbolisms from the Russian religious Orthodoxy and mythology.

What, in my view, makes Surikov’s art so quintessentially Russian are his portrayals of the faces and emotions of individuals caught in the historical events he paints in near perfect linear perspective. Throughout Surikov’s oeuvre, the formative events of Russian history are always punctuated with cultural symbols of Russia, such as snow sleighs, fur coats or Orthodox icons. It is the integration of these elements into history that makes this artist’s work so instantly recognisable to ordinary Russians.

The Morning of the Streltsy Execution, which I saw at the Tretyakov Gallery in Moscow, illustrates Peter the Great’s suppression of the Streltsy uprising of 1698 and the execution of the rebels outside the Kremlin walls. Fresh from the moving performance of Mussorgsky’s opera Kovanshchina at Mariinsky Theatre in St Petersburg which revolves around the same historical event, I was able to relive the raw display of the Tsar’s power in Surikov’s painting.

Also at the Tretyakov, I saw Surikov’s Boyarina Morozova which, like the story of the Streltsy rebellion, is the stuff of Russian legend. Feodosia Prokopiyevna Morozova was one of the best-known partisans of the Old Believer movement which resisted 17th century reforms of various Orthodox rituals. Morozova was perceived as a martyr after she was arrested – the event captured in the painting – and later died in prison. In Surikov’s painting, she holds up two fingers as a symbol of the old, that is “proper” way of crossing oneself with two fingers, rather than with three.

And finally, at the Russian Museum in St Petersburg, already prepared for Surikov, I marvelled at the realism of Taking a Snow Town. Unlike the previous two paintings, this is a picture without historical content and Surikov’s such only large work. Inspired by his childhood memories, it portrays a game played on the last day of Shrovetide when a small town would be built from snow and ice. One group would guard the town while the other attacked in a game based on the subjugation of Siberia by the Cossacks. Like Surikov’s historical paintings, this is a supreme celebration of the Russian soul.