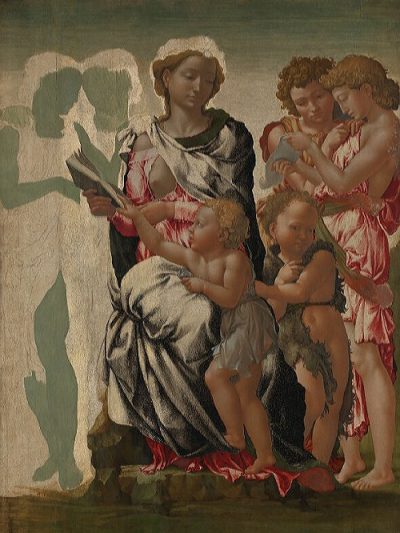 Some artworks are left incomplete by design, others by accident. In the case of Michelangelo’s unfinished Manchester Madonna, which hangs at the National Gallery in London, the reason is still a mystery. The painting, which is conventionally dated 1497 and is now almost unanimously attributed to Michelangelo, is composed of parts that are in varying stages of completion. As such, it is today analysed primarily for the artist’s creative process.

It is clear that Michelangelo preferred to tackle individual figures in his compositions one by one as demonstrated by the near finished characters to the right and the incomplete ones to the left. It is also evident that the artist used a green pigment as his base tone for flesh. The absence of vibrant colours typically associated with Michelangelo is due to the unfinished state of the picture but it was enough to spark a major debate about its attribution to the artist from the time the painting was shown at a grand Manchester exhibition in 1857 where it also got its name.

The painting’s subject stems from an extra-biblical tradition that Virgin Mary and the Child Jesus met his cousin, St John the Baptist, on the Holy Family’s Flight into Egypt. The Virgin is depicted with one breast bared – a nod to scenes common in medieval painting. She is holding a book, thought to be Isaiah 53, the contents of which foretell Christ’s future sacrifice. She appears to be holding the book away from her son for this reason. The figures, which include two completed and two incomplete angels, are arranged as if in a frieze, pointing to Michelangelo’s sculptor’s disposition.

It was not until the 20th century that unfinished paintings began to be studied for their apparent unresolved aesthetic. In the case of some modern artists, intentionally unfinished works are thought to embrace open-ended interpretations that essentially invite viewers to complete the objects artists had begun. Going even further, in Jackson Pollock’s drip paintings, compositions are acknowledged to be unfinished because they literally spill beyond the physical dimensions of the canvass.

Then there are Old Masters, like Michelangelo, where the question of finito or non finito has not been resolved conclusively. Titian’s gruesome masterpiece from the 1570s, The Flaying of Marsyas, is an example of such a debate. In parts, it appears refined and perfectly polished but elsewhere Titian’s brushwork is remarkably broad and free. Did the artist intend two styles – the meticulous and the carefree – to coexist within the same picture?

Michelangelo’s Manchester Madonna, by contrast, seems merely abandoned halfway through its completion but modern-day conjecture could be surprisingly plausible: much of the painting was left in its preliminary state with under-paint still awaiting to be over-painted, when an expensive pigment, most likely the one based on lapis lazuli that was traditionally reserved for the robes of Virgin Mary in similar compositions, would arrive.