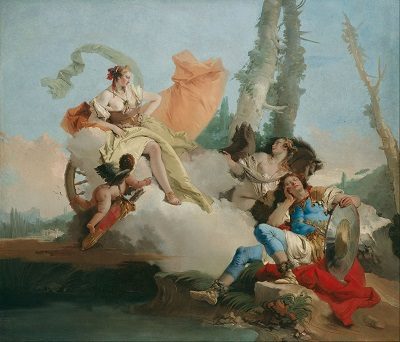 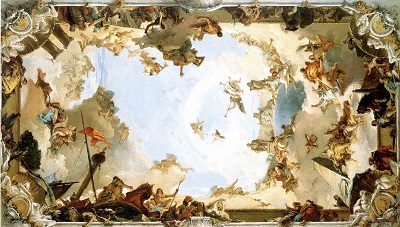 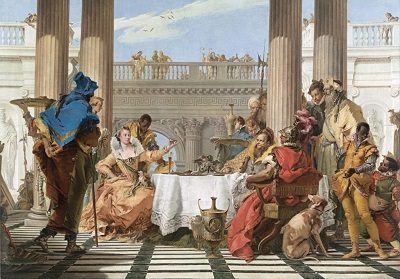 After the death of Paolo Veronese in the 16th century, Venice would not see a grand painter for a hundred years. It was Giambattista Tiepolo who would emerge from this vacuum in the 18th century with his continuous stream of frescoes, altarpieces, portraits, etchings and drawings that combine astonishing technical facility with intelligence and imaginative expression. Having decorated Venice, Tiepolo was invited by wealthy patrons to Germany and Spain. In the process, he didn’t only become the last big name of Venetian painting before the end of Venice as an independent republic but a master of truly international renown.

Today Tiepolo is considered the master of Venetian Rococo. The name of this artistic style derives from the French word rocaille – the shell-covered rock work used to decorate artificial grottoes, and refers to the 18th-century taste for elegance, lightness of touch and exuberant use of curving, natural forms of ornamentation. Its decoration combines asymmetry, gilding, white and pastel colours, sculpted moulding, and trompe l’oeil frescoes to create the illusions of surprise, motion and drama. In Italy the style was largely restricted to Venice where it gave expression to that city’s love of carnival and refined ostentation.

In this vein, Tiepolo’s art celebrates the imagination by transposing the world of ancient myth and history, the scriptures and sacred legends into a grandiose, even theatrical language. His art, with its departures from convention and its brilliant use of costume, celebrates the notion of artistic caprice (capriccio) and fantasy (fantasia). His frescoes are flamboyant masterpieces of airy nothing, as unreal as anything emanating from Hollywood, but with extreme refinement and aristocratic hauteur. As a painter, Tiepolo used a much cooler palette than previous Venetian painters, in order to create a convincing effect of daylight which lights up every room with his art in it.

The Venetian patricians quickly realised how talented Tiepolo was and in no time everyone wanted to have his ceiling frescoes in their palazzo. And since Venice likes to show off, these works had to be large. The compositions were usually allegorical or historical and always impressed with lively colour, charming chiaroscuro and verisimilitude. At Palazzo Sandi, my favourite, Tiepolo created The Triumph of Eloquence – a series of frescoes based on Greek mythology with an episode that features Orpheus and Eurydice. At Palazzo Labia, another personal favourite, he painted a Roman historical series with Anthony and Cleopatra. Both series are luminous and dreamlike, like a mirage.

Tiepolo’s ceiling and wall frescoes are unrivalled not only in their ability to demonstrate the artist’s imagination and virtuosity in the application of paint, but also in their sheer size and abundance throughout Venice. It is hard to believe that one artist could be so prolific and consistently perfect in execution. Tiepolo also produced superb easel paintings in oils and etchings, many of which are on display in Venetian churches and at Ca’ Rezzonico. After his death in Madrid, the rise of a stern Neoclassicism led to the decline of the Rococo style associated with Tiepolo, but even this transition failed to dent his reputation. His remains the last big name in Venetian painting.