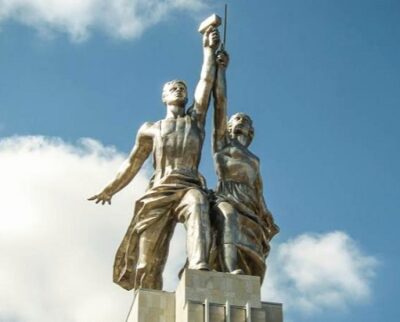 They lunge side by side on a giant pedestal in Moscow‘s VDNKh exhibition grounds – a hypermuscular man in overalls and an equally sinewy woman in a sundress, raising a hammer and a sickle to form the iconic Soviet symbol. The Worker and Kolkhoz Woman, easily the most recognisable of Soviet monuments, portrays the union of the working class and peasantry in the USSR. Much like the actual Soviet workers and peasants, this stainless steel couple has been through a lot.

The work of Vera Mukhina, the USSR’s premier artist who was once dubbed “the queen of Soviet sculpture”, the statue was originally created for the Soviet pavilion at the 1937 World Fair in Paris. The monumental sculpture, rendered in an Art Deco aesthetic, exudes Socialist Realist confidence of the 1930s Soviet Union. Somewhat misleadingly, the work was inspired by the sculptural pairing of Harmodius and Aristogeiton – the Greek duo who famously brought democracy to Athens.

The 1937 Paris Expo was the first time the Soviets were invited to such an event and they were determined to impress. With a dose of French humour from the World Fair’s administration, the Soviet pavilion crowned by Mukhina’s statue was placed directly opposite Albert Speer’s pavilion of Nazi Germany on the main boulevard at the Trocadéro below the Eiffel Tower. The monumental pavilions of the two authoritarian states – and future enemies – jointly won the Grand Prix of the Fair.

Back in the USSR, the statue was placed, to Mukhina’s fury, on a smaller pedestal in Moscow, which she called a stump. In 1947, it became an official emblem of the Mosfilm studio to introduce every Soviet film by a logo of a man and woman holding a hammer and sickle. After the fall of the Soviet Union, the monument was moved to the permanent Exhibition of Achievements of National Economy, abbreviated as VDNKh, in Moscow, in a setting resembling the Paris pavilion.