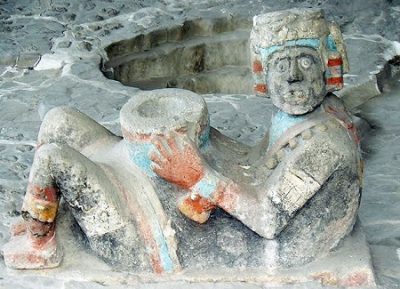 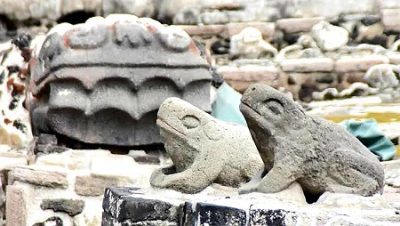 A true warring nation, the Aztecs have always battled, among others, a serious image problem. At the height of their power just before the Spanish conquest of Mexico, they had many local enemies. To be fair, the Aztecs practiced human sacrifice on an epic scale. Their captives would be brought to the main temple, the Templo Mayor, in the Aztec capital of Tenochtitlán to have their hearts ripped out alive, much to the horror of both the Spanish conquistadors and later revisionist historians.

When Hernán Cortés and his conquistadors first entered Tenochtitlán in 1519 and conquered it two years later, the Aztecs’ human sacrifices and fierce-looking pagan idols served to justify the Spaniards’ destruction of their capital along with their gory religion represented by the Templo Mayor. Even four centuries later, when interest in the country’s pre-Columbian civilisations was revived during the Mexican Revolution, it was the Maya, not the Aztecs, who drew most admiration.

The Templo Mayor once stood in the centre of Tenochtitlán, about 60 metres high. Modern-day models, like the one in the main concourse of Mexico City’s Zócalo metro station, show two stepped pyramids rising side by side on a massive platform. The temples on top of each pyramid were dedicated to two important Aztec deities – Tlaloc, the god of rain, and Huitzilopochtli, the bloodthirsty war god. The twin pyramids dominated the city built as a floating island on Lake Texcoco.

The layering of the steps unearthed during modern excavations suggests that the majestic structure seen by the Spaniards in 1519 was the Templo Mayor’s seventh rendition. Over the two previous centuries, the temple grew in size and elaboration to validate the growing power of the Aztec empire but also to mitigate the effects of flooding and the unstable lakebed on which it was built. After the conquest, the Spaniards razed it unforgivably for the capital of New Spain.

It wasn’t until 1978, after electricity workers dug out a carving of the Aztec goddess Coyolxauhqui, that the decision was taken to demolish colonial buildings to the left of the cathedral and unearth the Templo Mayor. With excavations still ongoing, the site is now an open-air museum. The base of the pyramids with its statuary is visible from the walking ramps above the spot where the Aztecs saw their eagle perching on a cactus with a snake in its beak – the symbol of Mexico today.