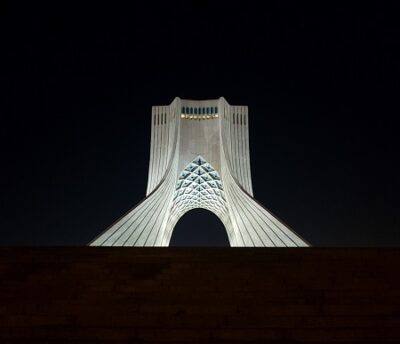 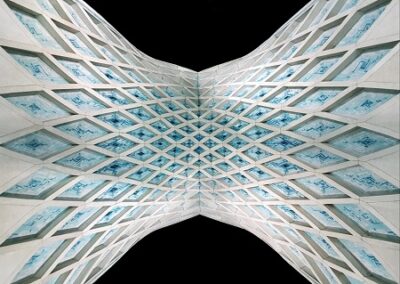 A fixture of Tehran’s skyline and a backdrop to some of Iran’s most turbulent political events of the late 20th century, the Azadi Tower is an ingenious design. The inverted Y-shaped structure clad in white marble combines modern Iranian and traditional Persian architecture and its gracious arch hides some complex structural engineering. Built as the Shahyad, a pet project of Mohammad Reza Pahlavi, the last Shah of Iran, the memorial is now called the Azadi (Freedom) Tower.

Completed in 1971 and opened to the public the following year to commemorate the 2500th anniversary of the first Persian empire, the tower was a symbol of Iran’s increasing oil wealth. The boom sparked various modernisation programmes and sent the local arts into a creative spin. Designed by Hossein Amanat, a fresh architecture graduate who in 1966 entered the Shah’s competition to design a national monument, the tower is now also a fading memory of those heady days.

As one of Tehran’s visual icons, the tower stood witness to the final years of the Shah’s reign and rode out the 1979 Islamic Revolution as well as an eight-year war with Iraq. It has also survived two Ayatollahs – and counting. It has seen much unrest and remains a focal point for demonstrations today, including some huge protests that give the Islamic Republic a run for its money. The name Freedom Tower, seen as a misnomer after the Islamic Revolution, might actually be spot on after all.

To reach the tower, which sits in the middle of a large oval park, you’ll need to negotiate some horrendous traffic, most of it running in circles around the monument much like the multi-lane highway around the Arc de Triomphe in Paris. Peji, my Iranian guide, sensibly suggested that we visit the tower after dark. The traffic making its rounds around it was still pretty horrendous but the beautifully illuminated monument revealed the real thrust of Amanat’s design against Tehran’s night sky.

At 45 metres in height, the tower is both robust and elegant and, looking up close, its underbelly is a sight to behold. It becomes clear that the 8000 blocks of white marble that were supplied for its construction from the Isfahan province, aren’t merely decorative but form the very bones of its design. Peji’s skill as a guide drove the message home as he suggested the best angles for photographs, including my favourite where the Azadi Tower appears suspended from the night sky.