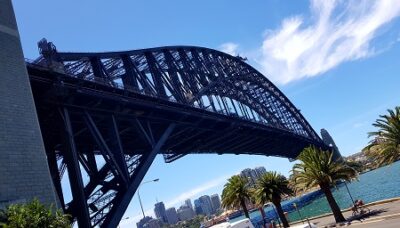 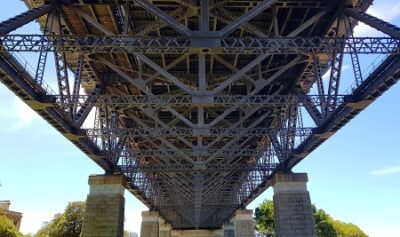 Opened in 1932, the Sydney Harbour Bridge remains the world’s widest long-span and tallest steel arch bridge. Nicknamed by doting Sydneysiders, it’s also the world’s largest “coathanger”. Soaring above Australia’s most iconic urban landscape which includes the Sydney Opera House and the harbour itself, the bridge carries in its eight lanes road, rail and foot traffic from the North Shore to The Rocks, but also performs another function: it’s a symbol of the city and the country.

Bridging the harbour between Sydney’s Milsons Point on the North Shore and the Dawes Point in The Rocks was a long time coming. Since 1815, several ideas, including a floating, truss and suspension bridge, had been bandied about until 1923 when construction of the current bridge began. A copy of the 1916 Hell Gate Bridge in New York City, the Sydney Harbour Bridge followed an arch design which was cheaper than any other proposal and also made the bridge better suited for heavy loads.

Visible from all over Sydney, the bridge is enormous. Its arch is 134 metres high, the span measures 503 metres with the width of 48 metres. All of this translates into 53 000 tonnes of steel. It’s all held together by six million hand-driven rivets that give the bridge its industrial feel. The arch was assembled from both sides until it joined and once bolted together it became self-supporting. With thousands of workmen on site, the bridge was a source of jobs during the Great Depression.

The four granite-faced pylons found at either end of the bridge play no part in supporting the structure whatsoever and are there for purely aesthetic reasons. They weren’t part of the original design and were only included later to give better visual balance to the bridge. Only the abutments at the base of the pylons are essential to support the loads from the arch and hold its span in place. During WW2, the pylons were modified to include anti-aircraft guns to assist in Australia’s war effort.

The bridge is now a Sydney institution and for Sydneysiders it’s the embodiment of city living. But the bridge is a living creature itself: it moves. On hot days expansion of its steel structure can increase the height of the arch by some 18 centimetres. Traffic also causes it to shake and to record this movement and then determine whether it’s within a healthy range, the bridge is lined with sensors. Further proof that the world’s tallest steel arch bridge doesn’t believe in half measures.