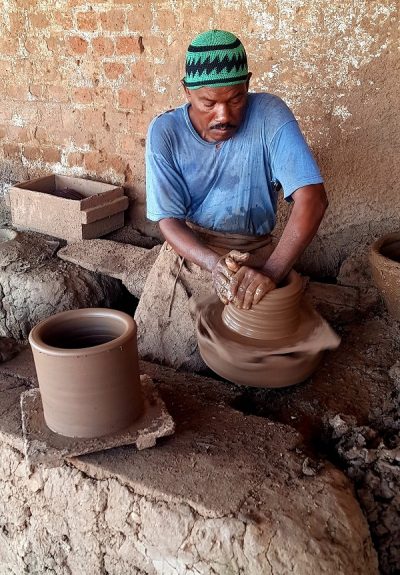 Arriving in Khartoum is as suspenseful as the trip to Sudan itself: one will only believe it when it happens. First, there was a particularly thorough passport check. Then a chaotic last-minute gate change duplicated an already lengthy security screening. Then, after a two-and-a-half hour flight from Cairo, the EgyptAir aircraft hovered above Khartoum for another 45 minutes, due to a navigation system issue, before finally landing. As it did, it also gave passengers a bird’s eye view of the three adjoining cities – Khartoum, Bahri and Omdurman – intersected by the Blue and White Nile, all set against a dramatic African sunset.

Sudan is a country on the ‘Muslim travel ban’ list and a country under financial sanctions by Washington, necessitated by its government’s alleged role as a ‘state sponsor of terrorism’ and human rights abuser in Darfur and elsewhere. Despite their announced relaxation last year, the sanctions are still a drag on international trade and tourism. There is runaway inflation and a parallel exchange rate for the Sudanese Pound. Foreign visitors, cut off from the international banking system of cash withdrawals and credit card payments, must bring enough hard currency to cover all their local expenses.

Sudan’s security state also imposes restrictions that slow down traffic and baffle the visitor. Travellers must register with the local police within three days of arrival in Sudan, despite giving their accommodation details to the immigration authorities at the airport. They also encounter countless security checkpoints along the desert roads to the Nubian heritage sites outside Khartoum, which they need a special permit to photograph. As in other parts of Africa, photographs of vaguely-defined government premises are off-limits as are, inexplicably, photographs of the confluence of the White and the Blue Nile in the centre of Khartoum.

Sudan’s heritage sites, about 200 kilometres to the north of Khartoum – the Meroë Pyramids along with Naqa and Musawwarat es-Sufra – show little evidence of funding for their preservation and maintenance. Most of the restoration work appears to predate the UNESCO status awarded in 2011, with the Temple of Apedemak at Musawwarat es-Sufra bearing a plaque which credits the former communist East Germany for its rebuilding in 1969. Victims of the 19th century Egyptomania, some of the movable assets from these sites have been re-homed in the West, including the statue of Isis from Naqa now seen at the Neues Museum in Berlin.

The region’s main draw are some 200 pyramids at Meroë which rise from the sand dunes like a row of broken teeth. Famously vandalised by an Italian explorer in search of Pharaonic gold, Giuseppe Ferlini, in the 1830s, the pyramids are smaller than their counterparts in Egypt. But the lovers of antiquities who dread the crowds at Giza can have these ancient Kushitic structures all to themselves on most days. The only signs of tourism industry here are a handful of malnourished camels that carry the occasional visitor to the foot of the pyramids and a few souvenir stalls where Sudanese boys shout over each other’s head to attract a lone customer.

Sudan, after all, is a land of contradictions. Hard to reach and hard to navigate, it has outgoing people living under a government whose politics few will discuss for fear of reprisals. It is a country whose southern half seceded from it in 2011 due to perceptions of racial and religious intolerance to form South Sudan but which now readily welcomes South Sudanese refugees from their own civil war with open arms as it does refugees from war-torn Syria. It is a dry country due to its strict Islamic code and one where, instead of a cold beer, one will only cool down from a cup of boiling hot coffee, which will never go cold in Khartoum’s scorching heat.

The place to stay in Khartoum is, without question, Acropole Hotel in the centre of town. It is a Sudanese institution since 1952 when it was acquired by an immigrant Greek family who have managed it since. Acropole offers an air-conditioned oasis in the midst of Sudan’s oppressive heat and personalised Greek hospitality with attention to detail that has all but disappeared with the onset of mass tourism. In addition, the trio of well-connected Greek brothers will arrange, with apparent ease, a visa on arrival for Sudan which is a premium piece of paperwork that officially does not even exist within the country’s Byzantine immigration laws.