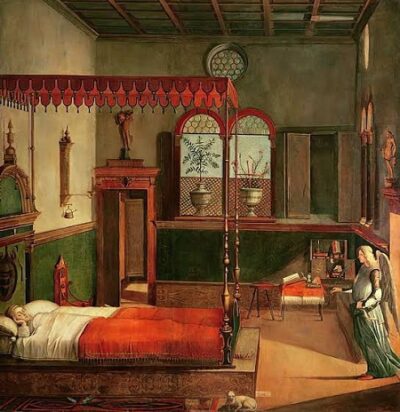 The nine large canvases by Venetian Renaissance master Vittore Carpaccio that make up the St Ursula cycle are among the best-loved in the Accademia. Painted in the 1490s for the Scuola di Sant’Orsola, a devotional confraternity in Venice, the cycle is based on the story of Ursula, a heroine in Jacopo da Varagine’s Golden Legend, a medieval bestseller. Carpaccio’s visual remake is a world in itself – filled with Venetians, canals, bridges and funnel-shaped chimneys.

According to legend, St Ursula is the daughter of a Christian king from Brittany who was reluctantly promised in marriage to a pagan prince in exchange to his conversion to Christianity. They both make a pilgrimage to Rome but on her way back home, at Cologne, she is martyred by Attila the Hun together with her entourage of 11 000 virgins after she has refused to become his wife. There’s no historic basis for St Ursula and her legend has many different variations, depending on the source.

Carpaccio, too, has created his own story line, mixing fantasy props with genuine Venetian settings and traditions that include religious processions, visiting ambassadors and colourful festivals. His visual narrative is so loose that the order in which the series was displayed over time has been modified several times, most notably in 1947, during the remodelling of exhibition spaces in the Accademia by Venetian architect Carlo Scarpa, which is essentially the display we see today.

Carpaccio’s frieze-like figure groupings – from the Arrival of the Ambassadors to the Glory of St Ursula – combine a fondness for anecdote with a keen eye for the clamorous details of contemporary life in 15th-century Venice. With its obvious appeal to pre-Raphaelite aesthetics, the cycle’s narrative richness and elaborate pageantry captured the imagination of the eminent 19th-century British art theorist John Ruskin whose writings on Carpaccio helped establish the artist’s modern reputation.

And it isn’t hard to see why. Even as Carpaccio depicts what is really a medieval horror story, his flights of fancy reveal a child-like innocence. He portrays things that children like: birds and animals, carnival clothes, boats and castles. Take The Dream of St Ursula – the bedroom scene in which the sleeping Ursula receives a message from an angel that she’s destined for martyrdom. With its canopied bed and cozy interior, it’s a dollhouse with a little dog lying awake in the foreground.