St Mark’s Campanile: An exact replica of itself 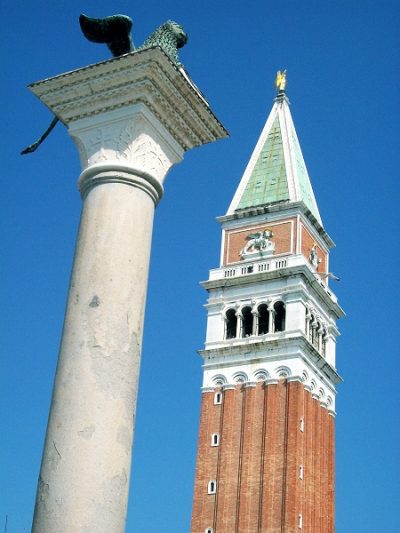 St Mark’s Campanile: An exact replica of itself

St Mark’s Campanile, the 99-metre tall bell tower of St Mark’s Basilica in the colours of the Italian tricolour, is perhaps the most recognisable symbol of Venice. The standalone tower, with a square shaft that is 12 metres wide on each side, bears the combined weight of 10 tons of bronze bells and is capped by a pyramidal spire with a golden statue of Archangel Gabriel on top, is a timeless design. So much so that it was painstakingly rebuilt as an exact replica of itself after it dramatically collapsed in 1902.

The campanile was repeatedly damaged by lightning, fire and earthquakes. Its pre-1902 incarnation was by no means a sound structure: it too heavy for its foundations and the vibrations of its five colossal bronze bells were a constant danger to the stability of the building. In 1902 it unceremoniously collapsed. It buried in its debris Sansovino’s precious Loggetta and sliced off one corner of the nearby Biblioteca Marciana. The basilica was spared and no casualties were recorded, except for the caretaker’s cat.

Despite the criticism of Bon’s design as clumsy back in the 16th century, the Venetian authorities, 400 years later, decided – on the same day it collapsed – to rebuilt the tower as a replica of itself. This is when the Venetian doctrine of restoration – com’era dov’era (“as it was, where it was”) was born. The campanile was rebuilt to the same design, only with some reinforcements to prevent future collapse and a lift as a nod to the 20th century. The rebuilt bell tower was inaugurated by the King of Italy in 1912.

The campanile remains the best option for panoramic views of Venice and its booming bronze bell – the Marangona – which used to mark the start and end of the working day for the Venetian artisans. The campanile is also remembered as the place from which Galileo Galilei demonstrated his telescope to the doge in 1609. The bell tower is also famous for its numerous knock-offs – from the early ones built in the Venetian territories in the Adriatic to the modern-day, Venice-themed resort on the Las Vegas Strip.