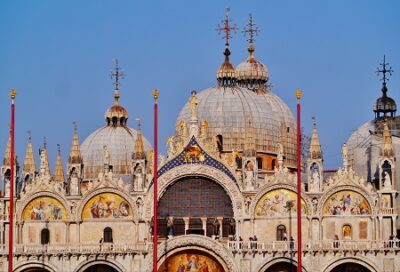 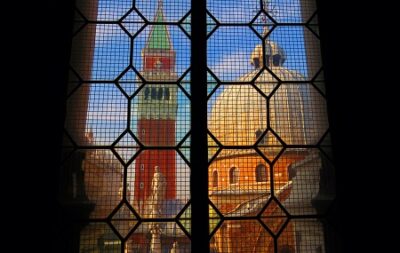 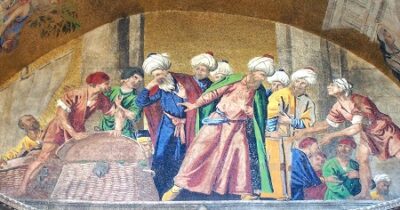 Sitting on St Mark’s Square next to the Doge’s Palace and across from St Mark’s Campanile, St Mark’s Basilica is Venice’s prime real estate. With a mass of hemispherical domes, niched portals and two acres of mosaics, it’s probably the best preserved example of Byzantine architecture outside Istanbul. It was custom-built for the body of St Mark the Evangelist after sharp-witted Venetian merchants smuggled it out of Egypt in a barrel of pork fat to get it past Muslim customs officials.

The present basilica, which incorporates earlier structures, was completed around 1071. It replicates the cruciform plan and five domes of the Church of the Holy Apostles which was once located on the site of the current Fatih Mosque on the Fourth Hill of Constantinople. Strangely, this opulent church was the doge’s private chapel throughout the entire existence of the Republic of Venice. It only became Venice’s cathedral in 1807 to replace the much less grand Basilica di San Pietro in Castello.

As in any Byzantine basilica worth its salt, St Mark’s mosaics are its pièce de résistance. Made with 24-carat gold leaf fused onto glass, they cover every surface to illuminate an otherwise dark interior. The basilica’s oldest mosaics are just inside vestibule. The mosaics inside the three golden domes along the nave are to be read from the apse: the Cupola of the Prophets, the Pentecost Cupola with the Holy Spirit as a fire-spitting dove and the Ascension Cupola with Christ hovering among the stars.

The mosaics then pour out of the basilica onto its front façade where they cover the inside of the five niched portals. Collectively, they tell the story of the famous theft of St Mark’s corpse by the Venetians in Alexandria: from turbaned officials recoiling from the hamper of pork fat containing the saint to the arrival of the relic in Venice and in the custom-built basilica. The exterior mosaics are especially resplendent just before sunset when the last of daylight sets their golden surfaces ablaze.

The basilica is also a monument to Venetian plunder. Booty from the Fourth Crusade fills its Treasury: hundreds of bowls and chalices – or what remains of the treasure later plundered by Napoleon. From the same source come the Byzantine enamels, now part of the Pala d’Oro – the altar screen beside the sarcophagus with the body of St Mark. And then there’s the Triumphal Quadriga – the four bronze horses, also from Constantinople, that now gallop off the balcony over St Mark’s Square.