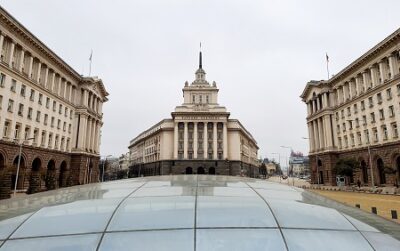 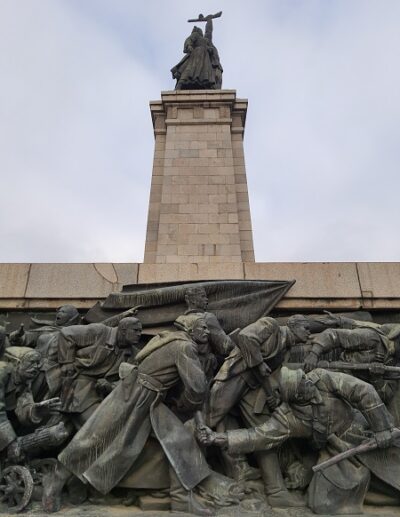 The mid-December sky had turned steely grey – a cue that I should explore Sofia’s Stalinist architecture. As a result of four decades of communism, Bulgaria’s capital has its fair share of Soviet-style monoliths. Among the finest are its very earliest – imposing structures designed while Stalin was still in power or shortly afterwards, with the goal of consolidating Soviet dominance in Bulgaria, and built with time-consuming and labour-intensive masonry before cynicism and complacency set in.

For Stalin, the immediate priority was to project the image of an invincible Soviet Union by any means necessary, including architecture. After WW2, the desired image was one of a victorious superpower engaged in a grand colonial enterprise in Eastern Europe and elsewhere. In Stalinist architecture, such ambitions necessitated classical references to be incorporated into buildings, including elaborate capitals, monumental arches and staircases, and decorative moldings.

In Sofia, the Stalinist pièce de résistance is, without doubt, the Largo. Consisting of three grandiose buildings that also form an impressive public square: the Tsum-Sofia department store (left), the President’s Office (right) and Party House (centre) which was the headquarters of the Bulgarian Communist Party until 1990. Built in the 1950s, the Largo has dominated central Sofia ever since and is one of the best architectural ensembles I have seen anywhere, communist or otherwise.

Just around the corner from the Largo stands the Monument to the Soviet Army, one of Sofia’s many but definitely its grandest. Built in 1954, this marble-and-bronze composition surrounding a phallic column honours Soviet soldiers who died fighting in Bulgarian campaigns during WW2. One of its ground-level reliefs has, irreverently and repeatedly, been defaced with spray paint to resemble the Russian activist band Pussy Riot, or American popular culture icons, such as Superman.