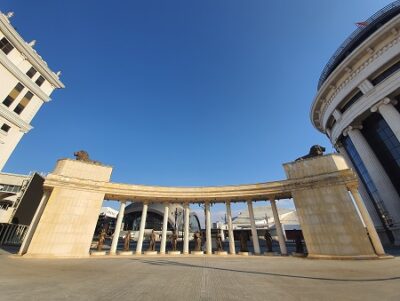 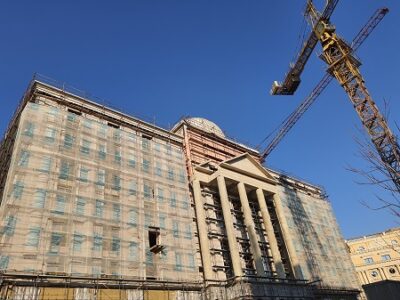 Out of the rubble of the 1963 earthquake has risen not a replica of Skopje’s pre-war self like Dresden or a brutalist substitute like East Berlin. Instead, the capital of newly-minted North Macedonia has re-imagined itself – wait for it – as an ancient Athens. That was the idea at least because the gaudy, faux-classical statues and edifices that line Skopje’s main square and the Vardar riverfront are more like Las Vegas. Is this modern classicism or historical kitsch? And, most importantly, why?

Based on pseudo-history, Skopje’s classical makeover, the result of a politically-driven public works project, does appropriate both Alexander the Great and Samuel of Bulgaria as Macedonians. Why stamp an ethno-nationalist identity on figures of distant history? To suggest, presumably, that the modern Macedonian nation, composed of relatively recent Slavic newcomers to the Balkans, dates back to antiquity which Skopje’s neoclassical façades, barely a decade old, readily evoke.

As a habitual news reader, the first thing I knew about Macedonia was the Greek complaint that the emerging nation was out to usurp Ancient Greece’s history. Rather than affirm the victimhood, the first sight of the bombastic theme park that is now Skopje has all but justified the gripe. Then there is the parallel Bulgarian complaint that Macedonians diminish an affinity with Bulgaria to claim a separate identity. Again, Skopje’s dodgy plastic surgery did little to suggest otherwise.

The other thing you can’t miss is that all of it was done on the cheap. Not that there’s anything cheap about the €600-million price tag which a developing country would have done better to spend on revamping its hospitals. It just all looks cheap with the odd marble slab sticking out of Styrofoam. It isn’t aging well either with mold setting on surfaces, some of which are still awaiting completion. But the cheapest part is the design where less would have been more.

I visited Skopje as a tourist and as such I would have wanted more. Why look at fake Corinthian columns when I can find real ones in Greece next door? Where Macedonia does stand out is as the birthplace of the Cyrillic alphabet. This history doesn’t dominate in any of Skopje’s public spaces or museums. Yes, there are statues of those concerned but they are lost in the multitude. Instead of the Greek bowls that scream high school pottery class, it could have been about the damn alphabet…