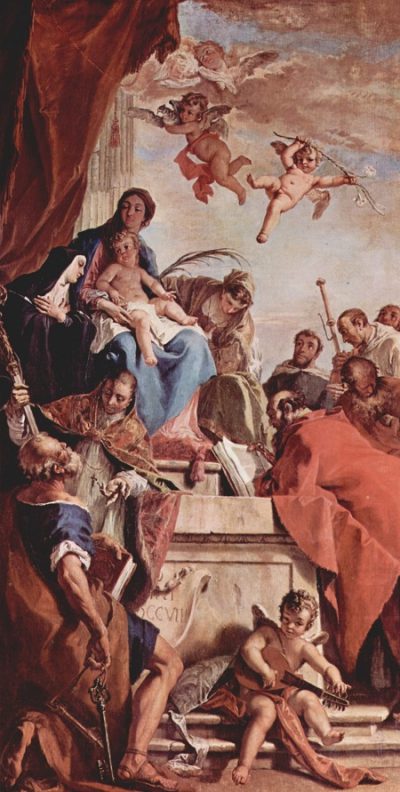 One of the principal figures in the revival of Venetian painting in the 18th century, Sebastiano Ricci and his dramatic and sumptuous work appealed to both ecclesiastical and royal patrons across Europe. Ricci’s monumental paintings and frescoes were indebted to Paolo Veronese and looked ahead to the next generation of Venetian artists, including Giambattista Tiepolo and Antonio Guardi. Like Caravaggio, Ricci always found himself one step ahead of the sheriff: a true itinerant artist.

Born in Belluno, Ricci began his training in Venice where he also tried to poison his pregnant girlfriend and had to flee to avoid retribution. This enforced absence, during which he travelled through Bologna, Parma, Rome and Milan, was the making of him as a painter. His brushes with the law persisted but Ricci established his career as a painter of frescoes and altarpieces as well as smaller works known as bozzetti (proofs). Some of these commissions took him as far as Vienna and London.

Ricci’s mature works reveal a careful exploration of Veronese’s colour and tone, expressive use of light, spacious compositions and richness of costume. He assimilates these lessons into a personal style formed during his years of travel. The result are works peopled by muscular saints and angels arranged on plump clouds. Ricci’s penchant for bold brushstrokes suggests an artist keen to explore all possibilities of paint. The emotional charge comes purely from the play of one shade against another.

Ricci’s monumental canvas of Virgin and Child with Saints, my favourite and still the altarpiece in Palladio’s church of San Giorgio Maggiore, is a colour-rich tapestry worthy of Veronese, the artist’s primary inspiration. It’s an ensemble of lushly brushed colour and light-modelled form. Ricci’s swift brushstrokes in this imposing altarpiece come across as conscious echoes of the dancing rhythms of the Rococo musicians, in particular Vivaldi, whose concerts the painter loved to frequent in Venice.

When it comes to ceiling frescoes – 18th-century Venice’s ultimate artistic medium – Ricci’s works are eclipsed by Tiepolo’s vertiginous galaxies. The death-defying acrobatics of the cherubs clinging to trompe l’oeil frames make it clear why Tiepolo dominated the genre at Ricci’s expense. It’s also true that these High Baroque fusions of art and architecture never flourished in Venice where counter-reformation ardour struggled to take root and where there could thus only be room for one master.