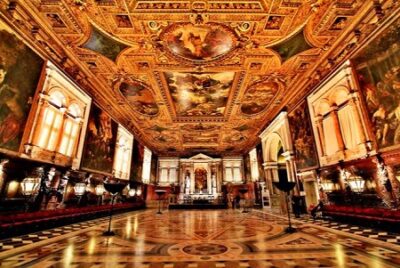 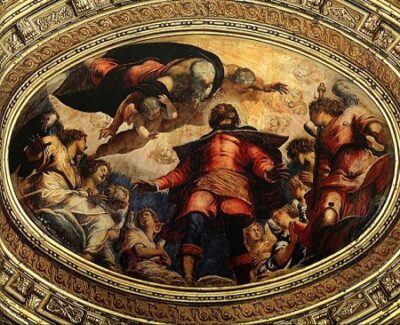 One of the most lavish public spaces in Venice, the Scuola Grande di San Rocco is peak Renaissance. Every inch of it is beautifully decorated: its spacious halls have intricately gilded ceilings and its floors and staircases are laid out as a geometry of polished stones. And then there are the paintings, more than 60 of them, depicting scenes from the Bible, and many of them by Jacopo Robusti, known as Tintoretto, with whom the scuola created an extraordinary partnership in the 16th century.

Founded in 1478, the Scuola Grande di San Rocco became the richest and largest of Venice’s six scuole – confraternities of the laity that functioned simultaneously as charitable organisations, mutual aid societies and social clubs. The fame of this scuola grew enormously, thanks to the veneration paid to San Rocco whose powers as a protector against plague attracted pilgrims to his relics housed in the adjacent church, thus increasing the prestige of the institution.

The building of its headquarters was entrusted to Bartolomeo Bon, although some assign it to his son Pietro. The work was continued by three other architects – Sante Lombardo, Antonio Scarpagnino and Giangiacomo dei Grigi. The design is similar to other scuole in Venice: two major halls – the Sala Terrena at ground floor level and the Sala Capitolare or Superiore at first floor level which also leads to the Sala dell’Albergo housing the Banca and the Zonta, the scuola’s supervisory boards.

In keeping with the Venetian tradition of artistic patronage, the scuola called for entries for commissions from the greatest painters of the day. With everyone wanting to paint this building, Tintoretto pulled a trick: instead of producing sketches like rival Veronese, he gifted a ceiling panel of the scuola’s patron saint, knowing it couldn’t be refused or matched by others. The painting still crowns the Sala dell’Albergo and his work now covers the walls and ceilings of all the other halls.

Tintoretto ultimately completed more than 50 paintings for the scuola during his lifetime. The works, depicting scenes from the New and Old Testaments, are considered among the artist’s finest. His paintings in the Sala Terrena are in homage to the Virgin Mary and focus on episodes from her life. In the Sala Capitolare, Tintoretto’s works on the ceiling are from the Old Testament and those on the walls are from the New Testament. Together, they tell the biblical story from Fall to Redemption.