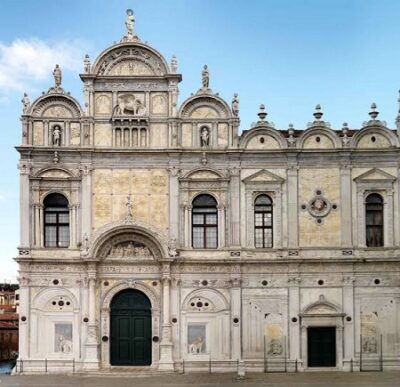 Decked out with statues and reliefs of saints, angels and winged lions, the gleaming marble façade of the Scuola Grande di San Marco is one of Venice’s grandest. Thought to be the work of Pietro Lombardo, Mauro Codussi and Bartolomeo Bon, the edifice also boasts one of Venice’s best architectural pedigrees. With the historic scuola long gone, the ornate building hosts a small medical museum but other than that it serves as Venice’s infirmary, easily the most palatial hospital in the world.

The scuola’s façade is a masterpiece of delicately decorated niches and pilasters with white and polychrome marble statues. While its polished marble decorations are decidedly Renaissance, the proliferation of arches and niches gives the building a retrogressive Byzantine flavour. An assortment of Gothic sculptures completes the picture. One of the best features of the façade is the use of trompe-l’œil archways and portals on the ground floor, all executed in different marbles.

The Scuola Grande di San Marco was one of Venice’s six scuole grandi – or Christian confraternities of lay people. Founded in 1260 and originally located elsewhere, the scuola moved to the present location in the 15th century but was soon destroyed in a fire. The construction of the replacement was entrusted to Pietro Lombardo who had just completed the nearby polychrome marble church of Santa Maria dei Miracoli. His contribution is the lower portion of the building’s façade.

Halfway through the construction, the scuola oddly commissioned Lombardo’s main Venetian competitor – Mauro Codussi – to complete the project. He duly finished the upper section of the façade, notably with the use of ornaments from the Lombardo workshop and two sculptures salvaged from the scuola’s earlier building and attributed to Bartolomeo Bon: the figure of Charity placed above the portal and a relief of St Mark with members of the confraternity inserted in the lunette below.

The former scuola once possessed three St Mark-themed Tintorettos, two of which now hang in the Accademia. The main chapter room on the upper floor still houses paintings from the original cycle by Domenico Tintoretto and Palma the Younger. The small museum inside exhibits medical tomes with all manner of weird surgical equipment once used for amputation and other malpractices. Like many others of its kind in Venice, the opulent building now functions as a modern hospital.