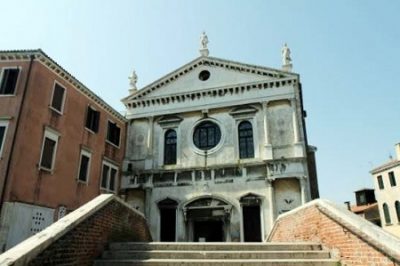 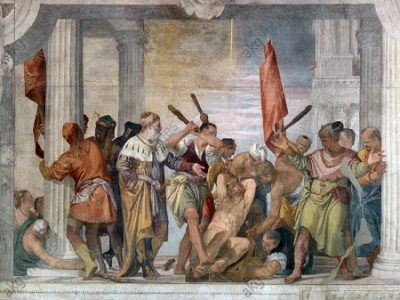 One of Venice’s five plague-churches, the church of San Sebastiano is primarily known for housing a cycle of paintings by Paolo Veronese. Built to temper divine punishment as the disease was seen in the 16th century, the ‘Veronese’ church was dedicated to St Sebastian, the martyr saint and one of the chief patrons against plague. A statue of St Sebastian wounded by arrows stands on top of the church’s plain Renaissance pediment but it’s on the inside where the saint takes centre stage in Veronese’s art.

St Sebastian was an early Christian martyr who, according to tradition, was killed during the Roman emperor Diocletian’s persecution of Christians. A captain of the Praetorian guard, he was first tied to a tree and shot full of arrows, rescued and nursed back to health. He then berated the emperor personally, for which he was bludgeoned to death. The martyrdom of St Sebastian, particularly the scene with arrows, is a recurring theme in Western art, including Venetian art by the likes of Jacopo Bellini or Titian.

It’s Veronese, however, who does this theme justice with an entire cycle of stories from the life and martyrdom of the titular saint inside his own designated church. The artist spent three separate periods decorating, in three different media, various parts of the church’s interior, walls to ceiling. This included paintings, ceiling canvases and frescoes on the nave and altar walls. He also decorated parts of the sacristy and choir in addition to completing the church’s organ decorations and a large altarpiece.

The result is a riot of Veronese’s artistry and an overload of St Sebastian’s life story. What you see inside the San Sebastiano church is a compendium of Veronese’s strengths as a figure painter, a dazzling colourist and a mastermind behind arresting, moving and always elegant compositions. A visit to the church is an opportunity to study, under a single roof, the full range of Veronese’s styles ranging from early to mature as well as his versatility painting in oil on canvas and wood or in dry tempera on plaster.

My favourite is Veronese’s rendition of a scene where St Sebastian stares down his tormentors with sticks amid a 16th-century crowd of Venetian socialites and foreign traders. In this scene and throughout the whole cycle, Veronese emphasised visual richness over the strict theological narrative, with figures in vertigo-inducing poses and in opulent colours. He also managed to bring the story of St Sebastian to a contemporary Venetian audience in what has been described as ‘the Sistine Chapel of Venetian painting’.