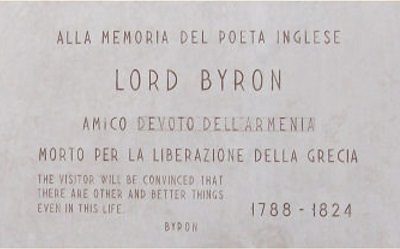 Between Venice and the Lido and safely off the checklist for mainstream tourists lies San Lazzaro degli Armeni, the Venetian lagoon’s historic Armenian monastery. Open to visitors for a brief daily tour to coincide with limited vaporetto traffic to the island, San Lazzaro is home to an impressive manuscript library, a legendary printing press and an eclectic museum. Originally a leper colony, the island is now an oasis of tranquility, fragrant with pine and roses and alive with lagoon birdlife. Among its famous visitors from history are George Sand, Richard Wagner and of course Lord Byron who would row to the island regularly in 1816 to study Armenian grammar.

One of the smallest islands of the Venetian lagoon, Isola di San Lazzaro degli Armeni was in fact greatly expanded though land reclamation in various phases. As a result of this, the island is now square-shaped and four times its original area. The island had served as a leper colony, equipped with a hospital and church, since at least the 12th century. In Venetian dialect, leprosy is mal di San Lazzaro after Simon the Leper from the New Testament who is sometimes identified with Lazarus of Bethany. After the lepers were moved out to the new Ospedale di San Lazzaro dei Mendicanti at San Zanipolo in around 1500, the island remained uninhabited.

In 1717, the island was granted by the Republic of Venice, at the pope’s request, to an Armenian monk Manouk Bedrosian, also known as Padre Mekhitar, who was a refugee from religious persecution at Constantinople. He and his 17 monks restored the existing church and built a monastery, which was mostly completed by 1750. The complex became a centre of academic learning, mainly thanks to its activities in translation and publishing. A publishing house was established here in 1789 and its work contributed greatly to the refinement of literary Armenian with what remains one of the largest collections of Armenian books in the world.

The wealth of knowledge stored inside the monastery was so impressive that the institution was recognised as an academy by Napoleon in 1810 when nearly all monasteries of Venice were abolished. (Some argue that San Lazzaro may have been spared at the behest of Roustam, Napoleon’s Mamluk imperial bodyguard.) Another significant episode in the island’s history, commemorated by a plaque, are Lord Byron’s visits to the monastery in 1816. He apparently commuted to San Lazzaro twice weekly for six months, studying Armenian and envying the monks’ academic lifestyle. The plaque refers to Lord Byron as a devoted friend of Armenia.

Today the island remains one of the best known historic sites of the Armenian diaspora. The monastery boasts what is said to be the world’s third largest collection of Armenian manuscripts, numbering some 3000. Venice’s place in the Armenian diaspora which famously outnumbers the population of Armenia itself is, of course, not limited to the island of San Lazzaro degli Armeni. For a brief period in the 15th century, the Republic of Venice was also the custodian of the Armenian Kingdom of Cilicia through the Venetian-born Queen of Cyprus Caterina Cornaro. All of this makes the island very special for Armenians – and anyone interested in their history.