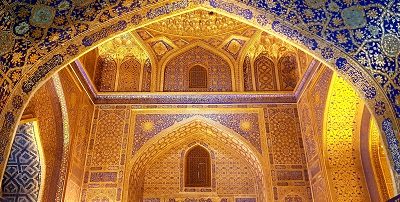 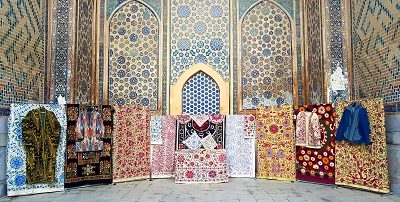 Samarkand, once an important stop on the Silk Road in modern Uzbekistan, is the staple of Western imagination. On the scale of places we’re never quite sure really exist, it’s right there with Timbuktu. As a traveller, I tend to operate on an ‘I’ll believe it when I see it’ basis but even this approach failed me when I saw this elusive place. Samarkand is all about colossal mosques and madrassas with towering minarets, bulbous domes, grand archways and electric blue mosaics. The effect is best described as hypnotic.

At the centre of all of this is the expansive Registan. An ancient wall-to-wall bazaar, it’s a vast, well-proportioned open space bordered by three of the world’s oldest preserved madrassas and an elevated observation deck. Covered in millions of biscuit-size tiles glazed in vivid shades of blue, the three lofty edifices and the four imposing minarets tilt so far inwards that they can easily induce dizziness. Lord Curzon called the ensemble “the noblest public square in the world” and he wasn’t far off the mark.

The stately portal and azure dome of the Gur-e-Amir Mausoleum mark the resting place of Timur, the Turco-Mongol warrior king who was responsible for Samarkand’s construction boom – and the devastation all around – in the 14th century. The crypt was controversially opened by Soviet anthropologist Mikhail Gerasimov on 21 June 1941 to bear an ominous inscription about exhumation leading to sure disaster. The following day, as goes every tour guide’s favourite anecdote, Hitler attacked the Soviet Union.

The last major overload of blue majolica awaits at the Shah-i-Zinda Mausoleums. The burial site has grown from the original grave and shrine of Qusam, a cousin of the Prophet Mohammed who had brought Islam into the area, into an avenue of mausoleums where Timur buried his relatives and favourites. This is possibly Samarkand’s best loved sight with some of the richest tilework in the Islamic world. The flowing inscriptions and mosaics are set into the most elaborate geometric patterns I’ve seen anywhere.

While the decorative tombs of the Shah-i-Zinda Mausoleums remarkably survived more than seven centuries with only minor touch-up work, the Gur-e-Amir Mausoleum and the Registan suffered from major neglect, not least during the Soviet times. All have since been painstakingly, if somewhat aggressively, restored. As a result of these renovations, much of the mosaic, majolica and terracotta work on display today isn’t original. Timur, a known megalomaniac, would probably approve even if the purists don’t.

Samarkand, arguably the most impressive single sight in Central Asia, can be packaged into a day trip from Tashkent if you zip from and back to the Uzbek capital on the Afrosiyob speed train as I did. To make my tour happen, I used Indy Guide to hire Bobosher, a supremely competent, knowledgeable and attentive local guide who easily arranged my train tickets on the Byzantine booking system of Uzbekistan Railways, drove me from sight to sight, and treated me to a tasty lunch of trademark Samarkand plov.