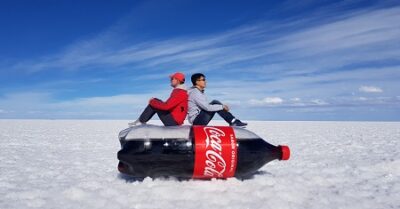 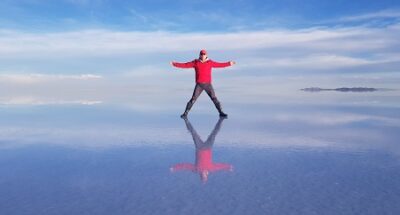 Primarily known to tourists as the stage for battle scenes with dinky dinosaurs, the arid and windswept Salar de Uyuni in southwestern Bolivia is also the world’s largest salt flat. The vast, desert-like expanse of shimmering white may look like snow but it’s actually a salt-encrusted surface that stretches out for more than 8 000 square kilometres. It sits on the Altiplano at 3 656 metres above sea level – a moderate altitude by Bolivian standards – and, by the same standards, it’s harto frío – damn cold.

Salar de Uyuni was formed after several lakes that had occupied this desolate corner of Bolivia over 12 000 years ago, dried up. A thick crust of salt deposit now extends to the horizon, making the surface extraordinarily flat with the average altitude variation within one metre over the entire area. This is mainly due to the seasonal flooding that dissolves the salt layer and after the rainwater evaporates, the salt flat is left level again. As this water dries up, the salt quickly crystallises into regular, quilted patterns.

When dry, between May and November, Salar de Uyuni is a desert with every optical illusion that comes with it. Looking into the distance, a mirage above the horizon emerges in every direction. During the rainy season, December through April, the views of the salt flats are amplified by the flood water that gathers here. Water turns the place into the world’s largest mirror where it’s hard to distinguish the earth from the sky. Either way, standing in the sheer openness of Salar de Uyuni is an amazing feeling.

A visit to Salar de Uyuni involves snapping pictures that play with the perspective. The key to great photos is to get the camera low to the ground and close to your prop. This gives the perspective that the prop is larger than the human standing further away. Guides who drive you around the salt flats are well versed in taking pictures of big persons in the foreground dwarfing tiny persons in the background or several people sitting on a single coke bottle and my guide duly came prepared with toy dinosaurs.

Surprisingly, this harsh terrain is home to some limited flora and wildlife, such as giant cactus plant and the Andean fox. The cacti take the illusion of a sand desert to a whole new level. For all its tranquillity, Salar de Uyuni also sits on top of some 70 percent of the world’s lithium reserves and demand for lithium – used in smartphones and batteries – could put an end to the place as we know it. Activists already worry the area could become a target for mining at the expense of the fragile ecosystem.

Salar de Uyuni is best explored from the nearby town of Uyuni. A late 19th-century trading post and Bolivia’s gateway into Chile, the small town has a cheerful buzz about it despite the icy conditions that envelop it. Uyuni is also known for its eerie train cemetery – a collection of rusty trains that seem to have run into the dusty ground decades ago. A monument to the mining rush that ended in the 1940s, the abandoned trains now narrow your options for getting into Salar de Uyuni down to bus or aeroplane.