Pondering the saucer domes of Sofia 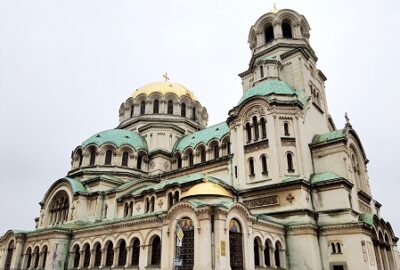 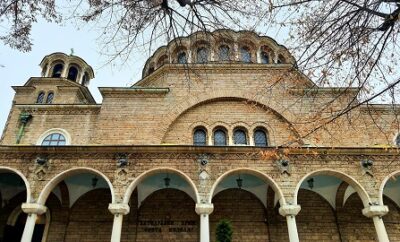 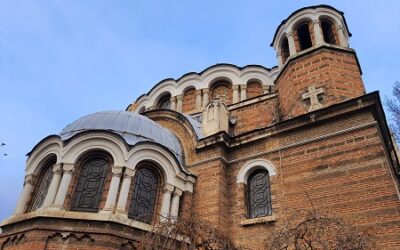 Pondering the saucer domes of Sofia

Unlike the onion dome of Russia whose conic shapes let snow slide off easily, the saucer-shaped Bulgarian dome is, on account of weather, mostly free from such inconvenience. Resting on a squinch or a pendentive, the soaring saucer dome is the Bulgarian Orthodox church’s most distinctive characteristic apart from the Greek cross ground-plan or the mosaics. Across Bulgaria, many church domes are also gold-coffered on the inside and some are even gold-plated on the outside.

This iconic, neo-Byzantine church has become the symbol of historic Bulgaria, even though it only dates back to the 19th century. During the Ottoman rule, the Bulgarian Orthodoxy somehow survived, hidden away in mountain monasteries. These were instrumental in the preservation of both the Bulgarian language and the Slavonic liturgy. Bulgaria’s struggle for independence peaked in the 19th century and this revival came with the renovation of medieval and erection of new churches.

In the spirit of the times, all of this church building grew big and ostentatious. No better example of this exists than the Alexander Nevsky Cathedral in Sofia. Built between 1882 and 1912 in memory of the Russians who fought for Bulgaria’s independence and named after a Russian folk hero, it’s one of the world’s largest Orthodox churches. Clustered with gold-laden saucer domes on the outside, the church’s cavernous interior is a riot of murals, chandeliers and royal thrones.

One of Sofia’s landmarks, the Sveta Nedelya Church has a most photogenic saucer dome which suddenly dominates every street view in its vicinity. Completed in 1863, the church is the successor of many medieval predecessors. In 1925, it was mostly destroyed in a bomb blast and assassination attempt on Tsar Boris III, in which over 200 people were killed but the intended victim was spared. What you then see today is a renovation of a 19th-century neo-Byzantine revival church.

Set in one of Sofia’s oversized residential squares, the Sveti Sedmochislenitsi Church was, unusually, built as a mosque in 1528 and made into a church in 1903. Dedicated to Sts Cyril and Methodius and their five disciples, known in Bulgaria as the Sedmochislenitsi, this revival church is proof of the period’s increased interest in Bulgarian saints and those perceived as Bulgarian. Its saucer-shaped dome also proves that the overall design could pass for a mosque as much as a church.