Pondering the onion domes of Russia 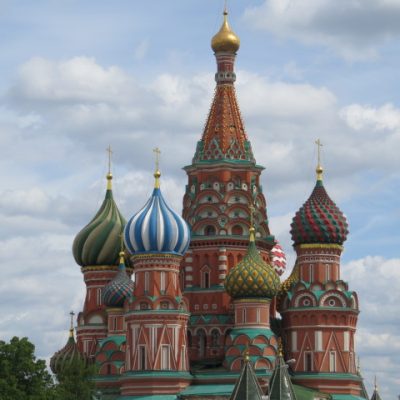 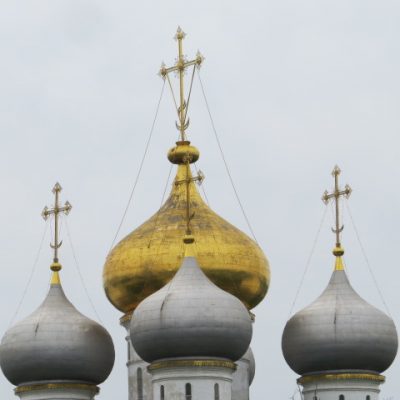 Pondering the onion domes of Russia

Nothing says Russia louder like the bulbous, candy-coloured domes of its Orthodox churches. The onion-shaped domes are both a distinct feature of Russian religious architecture and ubiquitous across the country. Often found in clusters of odd numbers, the domes glimmer in the sunshine from Russia’s smallest town to its larger-than-life capital. When they appear in groups of three, they represent the Holy Trinity and when they are five, they stand for Christ and the Four Evangelists. Domes standing alone represent the Saviour.

The question of their origin has baffled historians since at least the 19th century. The churches of Kievan Rus, built after the adoption of Christianity in 988, were the first examples of such architecture on Russian soil. These often featured many small domes which has led some historians to infer how the pagan Slavic temples may have looked. This theory suggests native roots: the Byzantine dome gradually transformed into the Russian onion under the influence of climate where bulbous domes allow snow to slide down and not to gather on top.

Another theory has linked Russia’s onion domes to the Orient, with actual sources varying from India to Tatar origins. Having admired the onion-shaped domes of the Badshahi Mosque in Lahore, I can say this is a possibility. Or take Russia’s most iconic building – St. Basil’s Cathedral in Moscow’s Red Square. It’s colourful and whimsical – everything a fairy tale building should be. Eugène Viollet-le-Duc, French architect who restored many medieval landmarks in France to fairy tale-like perfection, roundly rejected European roots for the cathedral, suggesting that its corbel arches were ultimately Asian.

Speaking of colours, those of Orthodox domes are highly variable. The symbolism here is not strictly assigned but can be deduced from the rules guiding Orthodox art. For instance, in Orthodox iconography, gold represents the light of God while red is a reminder of the passion of Christ, but also signifies the Resurrection. Similarly, green is the colour of the Holy Spirit, blue associated with the mother of Jesus, Mary, and white is used to denote holiness and purity. When multi-coloured domes are combined in one church as in green, blue, and gold, they represent the Holy Trinity.

The symbolism of onion domes doesn’t end there. The churches they adorn also symbolise religious leadership. This was based on the idea that Moscow, the hub of Russian Orthodox Christianity, was “The Third Rome” after the fall of Rome to the barbarians and the fall of Constantinople to Muslims. The clusters of onion-shaped domes make each church look like a small town – a symbol of the heavenly city of Jerusalem. This theory seems to tie up with another that suggests that the onion dome was reminiscent of the Edicule within the Church of the Holy Sepulchre in Jerusalem.

Just to throw water on such elaborate theories, I’ve also heard it said by ordinary Russian churchgoers that the onion-shaped domes simply resemble burning candles. Be that as it may, Russians have clearly spared no expense when constructing these places of worship. The continued prominence of these domes in Russia today is also testimony to the survival of a religion that stared down extinction under the previous, atheistic regime. For a visitor, the sight of golden-domed churches should be an invitation to step inside and into another world – one of gilded icons, fragrant incense and pure mysticism.