Amsterdam: Perfect Mozart at the Concertgebouw 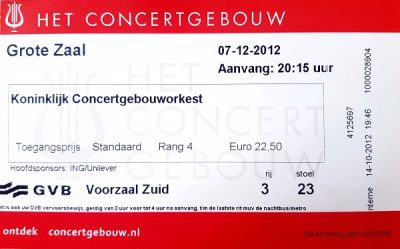 Amsterdam: Perfect Mozart at the Concertgebouw

Architecturally speaking, Amsterdam is a perfect mix of the old-fashioned and the ultra-modern where some of the best features of the city’s historic buildings are their futuristic add-ons. In the same vein, it seems to make perfect sense that Dolf van Gendt, the acclaimed architect of Het Koninklijk Concertgebouw, although considered to be completely devoid of musical talent, was able to create a perfectly resonant concert hall.

At the time of the Concertgebouw’s construction between 1883 and 1886, the science of acoustics was largely seen as black magic – a mysterious combination of many variable but undefinable factors. And yet, from our modern understanding of near-perfect acoustics, this majestic concert hall appears to have it all – from an ideal reverberation time, to uniform sound distribution across its entire surface, to appropriate sound levels to limited echo.

As in shipbuilding, up until the 20th century, when professional recording equipment was developed, architects drew upon what had worked in the past without grasping the underlying science. Van Gendt thus worked with the tested “shoe-box” principle and based the Concertgebouw’s Main Hall on the design of the Neue Gewandhaus in Leipzig. This (second) Gewandhaus was designed by Martin Gropius and opened in 1884. It was subsequently destroyed in the World War II fire-bombings.

On the two occasions I visited the Concertgebouw, on 8 July 2011 to hear the Nederlands Radio Kamer Filharmonie conducted by Thomas Zehetmair and on 7 December 2012 for the Koninklijk Concertgebouworkest under the direction of Sir John Eliot Gardiner, I found the Concertgebouw acoustics exactly what they are reputed to be: warm, clear, balanced and full-bodied. This was the case for both the first-rate resident orchestra under its star guest conductor and an obscure and now defunct local orchestra under a lesser known conductor/violinist.

Wallace Sabine, the American physicist who placed architectural acoustics on a firm scientific basis at the beginning of the 20th century, believed that the most important quantity in determining the acoustic suitability of a room for a particular use is its reverberation time. This depends primarily on the size of the room and it can be challenging for large spaces such as concert halls. The reverberation time must in so as far as possible be the same throughout the entire frequency range and the Concertgebouw design provides an ideal clarity for light and rapid string sequences such as Mozart’s.

There was plenty of Mozart during my two visits to the Concertgebouw, namely the Symphony No. 38 in D major – “Prague” and the Sinfonia Concertante for Violin, Viola and Orchestra in E-flat major conducted and partly played by Zehetmair and the Symphony No. 31 in D major – “Paris”, conducted by Gardiner. In both instances, the Concertgebouw produced a glamorous sound with minimal reverberation that so ideally suits Mozart’s generous tone, but also enhances Gardiner’s judicious application of subtly graded dynamics.

In terms of uniform sound distribution which is particularly important in large halls where the sound must be able to be heard equally well everywhere, the Concertgebouw did not disappoint. For the Radio Kamer Filharmonie’s Mozart and Dvořák (the Serenade for Strings in E major) I was seated on the podium to the left of the organ whereas for the Koninklijk Concertgebouworkest’s Mozart, Beethoven (the Piano Concerto No. 2 in B-flat major) and Tchaikovsky (the Symphony No. 2 in C minor – “Little Russian”), I sat in the middle of the third row. The distribution of sound was uniform.

The Concertgebouw also provides very appropriate sound levels where percussion instruments do not tend to outweigh the rest of the orchestra as is common in most concert halls. Its design and the sound-absorbing materials on its walls also prevent echo or flutter echoes to the point where the quality of music in this concert hall is enhanced resembles a recording studio with optimum acoustic properties. The Concertgebouw is simply a miracle in acoustic diffusion of reflected sounds that would otherwise interfere with your Mozart.