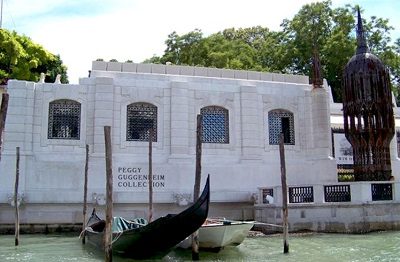 Peggy – she never needed the surname – Guggenheim remains the stuff of legend in Venice, where she died 40 years ago, and beyond. First of all, she was an American heiress whose inspired patronage of a generation of American and European artists had introduced modern art to Venice through an imported collection that has morphed into a public museum, the Peggy Guggenheim Collection. And then she was also an eclectic character who collected lovers as much as art, regularly cruised around Venice in her private gondola, and lounged on a chaise surrounded by generations of dogs at her Grand Canal home and gallery, the Palazzo Venier dei Leoni.

Guggenheim was the quintessential poor little rich girl, born to fabulous wealth in New York City. Her father Benjamin was one of seven brothers who, along with their father Meyer, made a fortune from smelting metals. Her mother, Florette Seligman, came from wealthy banking stock. She inherited from her father, who went down with the Titanic in 1912, a trust fund that would supply her with an income of $22 500 a year. This was much more then than it sounds today because it gave her independence at a time when women of her social standing were mere socialites and allowed her to travel to Europe and build an art collection.

She was largely a self-taught art connoisseur. Much of her education in modern art come from personal interactions with artists (some of whom doubled up as lovers) in New York, Paris and London of the 1920s and the 1930s. She held regular jobs in bookstores and art galleries and staged daring modern art exhibitions, some of which notably flopped. Without her generous patronage, it is doubtful whether the American Abstract Expressionist movement would have survived as it did. There are also heroic stories of Guggenheim saving her “degenerate” art from the Nazis along with artists like Max Ernst (her future husband) and André Breton.

Much has been said about her collecting technique, often as a cultural crusade when she boldly resolved to “buy a picture a day”. Her years spent in actual acquisition were, in fact, few: 1938 to 1940 in England and France, and 1941 to 1946 in America. Even so she amassed an impressive collection of minor masterpieces. She collected art like nobody else, picking up items that didn’t sell and works for which there was, as yet, no market, just because she liked them. She bought art, not as an investment, but because it appealed to her own taste. In doing so, she championed the work of artists before their universal acclaim, most famously of Jackson Pollock.

In the late 1940s, she discovered Venice. Once again she defied the trend and moved to Europe just as the centre of modern art was shifting in the opposite direction to America. She bought an unfinished palazzo on the Grand Canal as a permanent home for her art collection. She regularly opened her doors to the public, an idea that survived her with a home museum opening after her death. Against the backdrop of historic Venice, her palazzo displaying the works of Braque, Duchamp, Léger, Dalí, Miró, Picasso, Giacometti, Kandinsky, Klee, Magritte, Mondrian and Calder seems as incongruous – but fabulous – today as it would have in Guggenheim’s heyday.