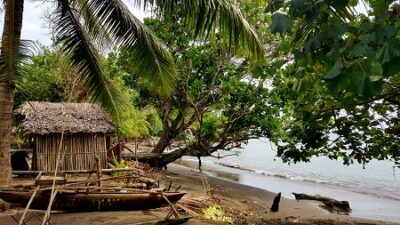 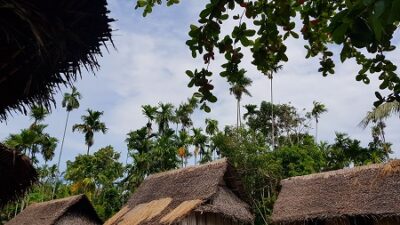 The setting is a village scene by Pieter Breughel, or rather a Papuan version of it. One group of women is knitting a fishing net and another is cooking lunch on a pile of cinders. Little boys are scaling a palm tree, under which adults are carving a canoe. A gang of elders are sharing what looks like the world’s longest joint. In between all this, chickens are racing in all directions while dingo-like dogs snooze in the shade. This is Hobe tribal village outside Madang in Papua New Guinea, going about its daily business.

Getting to Hobe from Madang was an undertaking. Business hours here are always a rough estimate and the Madang Visitor and Cultural Bureau, my point of departure, opened two hours late. The driver took another hour to arrive as did the guide. The short journey through the lush rainforest was made much longer by the giant potholes. The van’s suspension rattled to the same rhythm as my bones. With each passing minute and every shriek of local birdlife, the van was heading further back in time.

This tribal village, like thousands of others in Papua New Guinea, has changed little despite four colonial occupations and thousands of years of human habitation since prehistoric times. The Papuan tribes, more than 700 of them, are the backbone of the land. They live in the wilderness where they pick coconuts, hunt crocodiles, share resources and create magnificent wooden carvings. They survive bloody tribal warfare and their government’s epic corruption as they had survived colonial rule and the missionaries.

Each tribal village is the self-sustaining centre of universe. It’s a well-oiled machine where everyone falls into place. The village green – with green being the operative word – is where the tribe works and plays. The A-frame homes raised on stilts and roofed with leaves all around it are where the tribe sleeps. The tallest of all is the haus tambaran – a place of worship where ancestors’ spirits live. It’s all a permanent construction site where houses, battered from the rain and wind, require endless repairs.

Everyone I greeted, replied politely – with a mouthful of betel nut. Discouraged because the practice eats away at gums and teeth, the nut is chewed en masse here as a stimulant. Many dark-skinned villagers also came with perfectly blond hair. Long assumed to be a European throwback in the area, the blond gene is in fact a Melanesian rarity. For visiting tour groups, villagers are expected to drop everything and perform a circus-like sing-sing. Since I wasn’t a group, this didn’t happen and I preferred it that way.