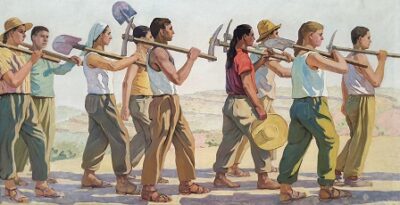 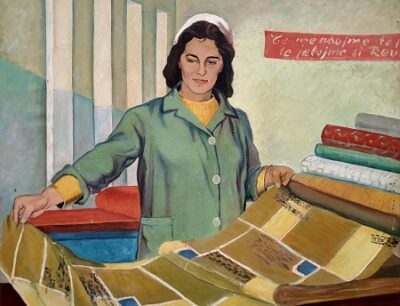 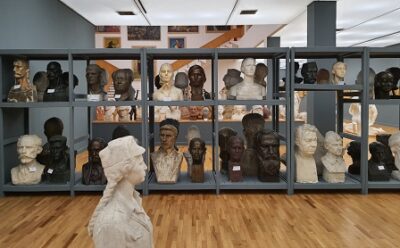 I have reviewed socialist realist art in places as diverse as Russia and Kyrgyzstan, but nothing could prepare me for the jolt delivered by Albania. Isolated from the West by default and from the East by paranoia, Albania was “the only socialist country in the world” and it shows. By definition, socialist realist art is euphoric, depicting the enthusiasm of building a new society. In Albania, it reaches beyond mere depictions of collective labour towards another world almost impossible to reach.

Like in other communist countries, socialist realism shaped Albanian art from the mid-1940s until the fall of the regime in 1991. During this time, the Albanian state directed and controlled artists as well as all artistic creativity. Artists were tasked with the ideological change and education of workers in the spirit of socialism. Their art consisted of depictions of the working class in action, breakneck industrialisation, and portraits of enlightened communist leadership.

In Albania, under the scrutiny of Enver Hoxha’s propaganda machine and outside of Soviet or Chinese influence, socialist realism took on a life of its own. In its art, Albania’s isolationism has added an extra oomph to workers’ enthusiasm because they knew they were building socialism on their own. And in the only society that was officially atheist, art has assumed religious proportions, with women in particular transcending their traditional roles in motherhood as working professionals.

While museums in Russia still proudly display monumental canvases of Soviet socialist realism, in many former Soviet republics and satellite states this art is associated with the culture of the former occupier. In the isolationist Albania, there was no foreign occupier and Albanian socialist realist art is the work of the local state propaganda, which served a domestic political agenda. As such, Albanian art of the period is hard to dismiss as an assembly-line art of imported clichés.

What you then see in the National Museum of Fine Arts in Tirana – the home of Albania’s socialist realism – is mostly homebrew and original. Some of the works here are composed with angular figures in motion that resemble the grandees of German modernism. Others touch on the greatness of Diego Rivera‘s muralism. Although it lacks in any labelling and only presents its sculpture on simple warehouse shelving, the museum is a perfect time-capsule just as you’d want it to be.