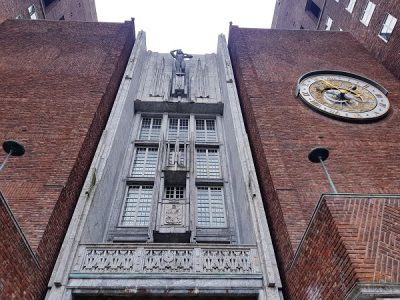 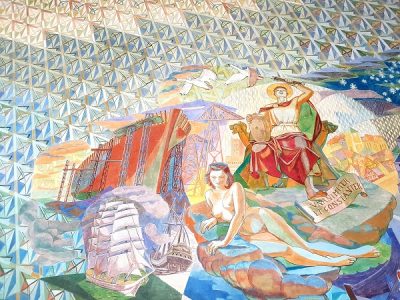 As a child, I used to page through a glossy, Swedish-language tome titled Som en Saga which my dad once brought home from work at a publishing house. It was a lavish pictorial celebration of European capitals and the image of Oslo’s red-brick city hall, or Rådhuset, was included under Norway. Back then I knew nothing of functionalism and wondered why such an ordinary-looking building was placed alongside Oslo’s Royal Palace, let alone the Arc de Triomphe under France.

When I finally saw the real deal in Oslo, the Rådhuset appeared much larger than I had imagined but, even with the brooding air of brutalist architecture, it was far from ordinary. The monolithic structure with two iconic towers was designed by Arnstein Arneberg and Magnus Poulsson and took almost two decades to build between 1931 and 1950. Construction was halted during WW2, when Norway fell under Nazi occupation and this period is referenced in some of Rådhuset’s artwork.

The architecture of Rådhuset is clearly functional as the building caters for the activities of Oslo’s municipal government, dealing with urban planning and development, and general services such as marriages and refuse collection. The grand hall between the two towers also serves as the venue for a ceremony where every year, on December 10, the anniversary of death of Alfred Nobel, the Nobel Peace Prize is awarded in the presence of the Norwegian royals.

At first sight, the stern-looking building does indeed reflect a philosophy where form follows function, but when observed closely, it is also obvious that Rådhuset possesses a complex layer of ornaments and embellishments that are rather alien to modernism. One example of this on the building’s exterior is elaborate layering and stacking of the bricks in addition to intricate detailing of windows and pillars in stone that echoes the richness of Art Nouveau ornamentation.

The interior is equally impactful with clerestory windows that stream in daylight and give the large rooms, particularly the grand hall a church-like atmosphere. Then there is public art. Large murals, reminiscent of the work of Mexican muralists both in content and in form, decorate the grand hall depicting imagery from Nordic mythology as well as modern social democratic politics, of which Norway is one of undisputed global centres.

Rådhuset may dominate the city’s skyline at the mouth of the Oslofjord but is also stands out of place against the typical Scandinavian architecture all around it. The building’s sterile structure and the propagandist art on display are both fascinating and sinister. And it can certainly pull a crowd. What would otherwise be quite a regular office block with a large cavernous hall is thus skillfully transformed into a veritable tourist site.