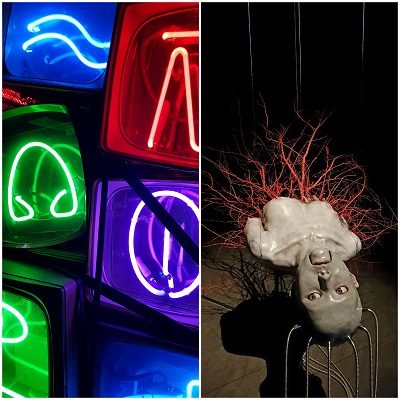 Russian-American sociologist Pitirim Sorokin penned a multi-volume cultural history where he explored the ways in which socio-cultural themes are coherently expressed through art and science. In the work of Nam June Paik, South Korea’s truly global artist, this seems to work both ways. Paik’s installations, which he pioneered as video art from the 1970s, are an artistic takeaway from the country’s electronics boom of the same era. But Paik’s artistic use of TV screens in video art installations also redefines the cultural ramifications of television away from consumerism and towards high culture.

Paik is best known for his installations of multiple TVs in out of place settings, with his video art focusing more on the medium than its content. Back in the day, his vintage domed TV screens enclosed in boxy equipment must have demystified technology for contemporary viewers. To today’s audiences, well versed in the language of digital revolution, Paik’s video art is a nostalgic trip into a bygone era. Paik’s TV screens carry an overwhelmingly positive message of play and discovery, not of surveillance and addiction which also accompanied the rise of television as new technology.

My first encounter with Paik was through his TV Garden, a mid-1970s installation, in which TV sets are embedded among ferns and shrubs, playing random clips from around the world. Amid the greenery, the TVs look like flowers and the atmosphere is strangely reassuring. Just as restful is Paik’s TV Buddha, also an installation from the mid-1970s where a Buddha statue gazes at a filmed image of itself on a vintage TV screen. It is an image that is both kitsch and random, taking the viewer back to the Fluxus era of the 1960s Germany where Paik kicked off his career as an artist and child of Korean War refugees.

Whereas Paik’s TV Garden and TV Buddha exist in multiple versions as part of post-war collections of multiple art museums, his 1995 opus magnum, Electronic Superhighway, is unique and perhaps the most recognisable work at the Smithsonian American Art Museum in Washington, DC. Here several hundred TV screens and metres of neon tubing are arranged to resemble the map of the United States. For each state, televisions play clips from local popular culture. The installation reimagines the interstate highway system in America as an information network and, in doing so, anticipates the internet age.

In Seoul, where I made a point of seeking out South Korea’s most famous émigré artist, now stands the gleaming Nam June Paik Art Centre. It’s located in Suwon – a ridiculously long subway ride from central Seoul in a working class suburb where Paik was born and where no one I asked in the streets knew of its existence. I did find it and it did deliver a big sweep through Paik’s artistic output. The gallery which also features works of Paik’s successors, always in dialogue with his installations, is a fitting tribute to South Korea’s pre-internet prophet who remains tied to the eye of a convex TV screen.