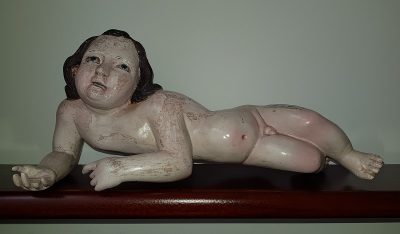 Fresh from a tour of Bogotá’s grand colonial-era churches, I quickly realised I could not leave South America without my own santo. The reclining baby Jesus I finally settled on came from a dusty antique store adjoining a square with the Gothic-Revival cathedral of Nuestra Señora de Lourdes in Chapinero.

The chubby statuette, carved in vivid detail from solid wood, then painted and adorned with glass eyes, is a Quiteño. The Quito School, where he hails from, is a Latin American artistic tradition best known for its serpentine representations of moving human bodies and the uncanny realism of skin tone called encarnado, which is Spanish for ‘flesh-coloured’.

As a product of cultural syncretism and miscegenation, the works of the Quito School are characterised by the combination of European and indigenous features. My Quiteño’s corpulent frame is thus derived from the Baroque naturalism of Spanish sculpture while his broad facial features reveal a skillful adaptation of native Ecuadorian physiognomy.

As an instantly recognisable figure from the Nativity, the baby Quiteño is allusive to a famous narrative scene from the life of Christ, as presented in all four Gospels. Created for the benefit of the illiterate, the statuette is part of an iconographic system developed to conclusively identify all-familiar Bible stories.

My baby Jesus is also a homunculus (Latin for ‘little man’) or one of those grotesque, oddly-proportioned old man babies of medieval art where infants were depicted as the tiny adults they would become until such depictions gave way to the more naturalistic and recognisably cherubic babies of the Renaissance.

With such an elaborate pedigree, this Quiteño represents a fascinating blend of indigenous concepts and European art forms as opposed to more naïve or primitive santos carved by indigenous folk artists who may have lacked a formal training but not religious devotion. As such, this Quiteño is now also a great conversation piece in my home.