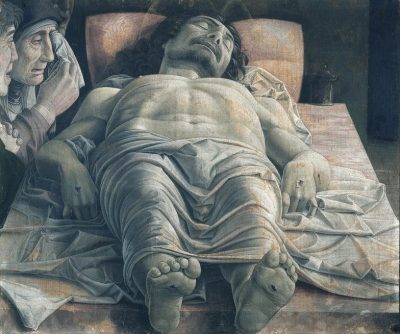 This is a hands-down revolutionary take on the Lamentation over the Dead Christ from Renaissance artist Andrea Mantegna whose use of colour, detail and perspective comes very close to the naturalism of the 19th and hyper-realism of the 20th centuries. Some have said that such an image of the dead Christ borders on irreverence: this is a scene from the modern-day mortuary brought to us with the immediacy of reality TV.

Mantegna’s body of Jesus, supine on a marble slab, is not an idealised portrait of Christ: the graphic stigmata in the hands and feet, the discolouration of the skin and the limbs stiffened in rigor mortis create a highly naturalistic representation of death. The artist’s dramatic perspective which foreshortens the recumbent figure and focuses the viewer on the soles of Christ’s feet has elements of hyper-realism which resembles high-resolution photographs.

This is a fine example of painting di sotto in sù (seen from below) which also places the central focus of the image on Christ’s genitals covered by a draped sheet. This is an artistic choice that is open to a multitude of interpretations. It also contrasts Mantegna’s Lamentation with the solemn portrayals of this scene by Giotto, Botticelli, Annibale Carracci or Rubens. In Mantegna’s picture, the grieving figures of Mary, St John and Mary Magdalene appear marginal.

The Paduan artist is often juxtaposed against his Venetian brother-in law Giovanni Bellini whose bucolic portraiture of saints only serves to emphasise this highly experimental view of Christ by Mantegna. The painter had already experimented with atypical vanishing points in perspective in the ceiling frescoes of the Camera degli Sposi in Mantua but this picture, reputed to be Mantegna’s last and intended for his funerary chapel, takes his perspective painting to a new level.

The Lamentation over the Dead Christ is an extra-biblical theme which does not appear in any of the gospels, and only emerged as a devotional image in medieval and later Renaissance art. Mantegna’s take on it is both disturbing and puzzling. The painting’s perspective compresses the dead body violently while the details and surfaces remain vivid and hyper-real, and Christ’s facial expression is appropriately terrifying.

This is one of the highlights of Milan’s majestic Pinacoteca di Brera along with Francesco Hayez‘s equally emblematic 19th century painting The Kiss. It is clear that Mantegna’s realism prevails over any aesthetic indulgence of his Renaissance contemporaries and his Lamentation over the Dead Christ charts a new direction which the Quattrocento art and the artistic himself could have taken had this not been his very last painting.