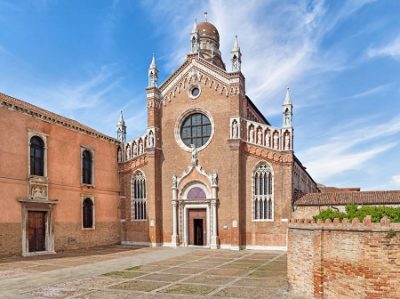 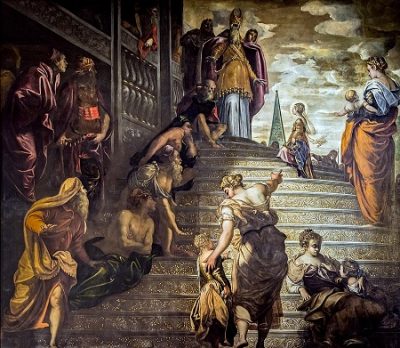 With its redbrick marble-trimmed façade, the sloping galleries of apostles and the onion-domed tower, the Madonna dell’Orto is one Venice’s most aesthetically pleasing churches. It was Tintoretto’s parish and burial church, with as many as 11 of his works, including Presentation of the Virgin, still hanging here. It also features a signature, Bartolomeo Bon-designed doorway, one of the best in town. To top it off, its location on the outer edges of Cannaregio ensures that the worst of the tourist crowds stay away.

The church takes its name from a sculpture of the Virgin that was found in a nearby orchard (orto) but was really a reject from the church of Santa Maria Formosa, for which it had been carved. Legend has it that the statue glowed at night and worked miracles which, in turn, unleashed crowdfunding to complete the church. The architecture and colour scheme are examples of the Venetian Gothic, a local variant of the Italian Gothic with elements of Byzantine and Islamic architecture, reflecting Venice’s trading network.

The 15th-century façade is in red Venetian brickwork and has a large Gothic rose window. The sloping galleries of apostles, carved by the Delle Masegne brothers, are an architectural rarity in Venice. Another one – the doorway, by Bon, features a Gothic ogee arch with a Renaissance rounded arch underneath. This mixture of styles is likely because the doorway took too long to complete. The onion-domed bell tower at the back of the church, at 56 metres one of the highest in Venice, resembles an Islamic minaret.

When you visit today, you’d never know that the church had been deconsecrated and left to crumble as horse stables, a hay and wine store and a powder magazine. Under the Austrian rule in the 19th century it was further vandalised by poor restoration with the façade plastered over and the ceiling frescoes along with the organ destroyed. Much of the damage was reversed during later restorations, particularly after the great acqua alta of 1966. Its current state is a true miracle – perhaps the work of its miraculous relic.

The Venetian Gothic interior has a characteristic ship’s keel ceiling and a herring-bone patterned pavement. This is where you come to see Tintoretto’s work in the context for which it was created. My favourite among the artist’s 11 paintings here is his Presentation of the Virgin with a young Mary climbing up a rounded staircase towards a priest. The chiaroscuro and the sheer theatricality that make Tintoretto’s art so distinctive are present here – inside the very church where the painter would worship.