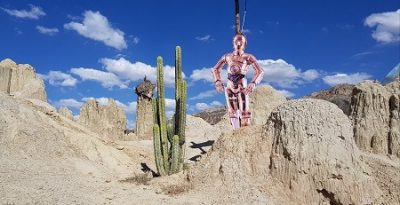 With its jostling vendors, incessant hooting, street marches and bowler-hatted cholitas clad in psychedelic colours, Bolivia’s de facto capital La Paz is an echo of pre-Columbian Americas. At 3640 metres above sea level and surrounded by jagged mountains, few cities of its size boast such extreme geography and rough beauty. It’s a melting pot of peoples, cultures and beliefs where indigenous pride rubs against social conservatism and where solemn colonial churches co-exist with the pre-Hispanic cult of Pachamama. The effect is positively theatrical.

If 3640 metres above sea level sounds overwhelming, be aware that the city’s El Alto airport sits on the high plain some 420 metres above La Paz. The travel guides that warn visitors about altitude sickness don’t lie. The air is thinner at such high altitude and you absorb less oxygen which leads to symptoms, such as shortness of breath, headache and nausea. I ticked off all of the above as I stumbled through Bolivian passport control. If you fly into La Paz from sea level, like I did from Lima, you’ll suffer the most. Thankfully, the discomfort is short-lived.

“The Coca Museum’s visitors can have a go at chewing the leaves for their stimulating effects. I did”

The best cure for altitude sickness was in fact my nighttime drive from the airport, at breakneck speed in a banged-up taxi, down a spiralling road into the steep-sided funnel lined with stacks of red-brick homes that is La Paz. At the bottom of the built-up canyon lies its historic centre where colonial architecture cohabits with modern skyscrapers. Unlike in most other cities where elevated spots with views equal higher property prices, in La Paz the rich inhabit the lowest-lying areas where oxygen is more plentiful and one can actually breathe.

La Paz’ centrepiece is the San Francisco Basilica facing an eponymous plaza. The religious edifice was built in the baroque-mestizo style which blends Spanish and native Aymara art. It’s a replica of the original which had collapsed due to extreme snowfall. This is believable because La Paz, despite its blinding sun, is rather frosty. The plaza in front of the church is the staging ground for protests. Even without those, its street life is made for people-watching: the vivid colours of Aymara textiles and bowler hats worn by cholitas are a sight to behold.

Just behind the basilica is the fragrant Witches’ Market. Its vendors are purveyors of herbal potions and native amulets rather than flying broomsticks but the sun-dried llama fetuses used as offerings to the Aymara earth mother Pachamama do border on serious witchcraft. Close by is the unusual Coca Museum dedicated to the controversial coca leaf. Apart from being the key ingredient in cocaine, this plant has a history of sacred use in the Bolivian culture. Museum’s visitors can have a go at chewing the leaves for their stimulating effects. I did.

Due to its topography, La Paz has the world’s largest cable car system. Mi Teleférico has eight colour-coded lines which criss-cross the city bowl to reach the cloud-hugging high plain above. The views are magnificent. Further afield, some 10km from downtown La Paz is a unique area featuring lunar landscapes. The Moon Valley isn’t a valley at all, but a maze of spires, created by the erosion of surrounding mountains. The rocky terrain spotted with cactus plants has the makings of a Sci-Fi film set. Like the rest of La Paz, a true red carpet experience!