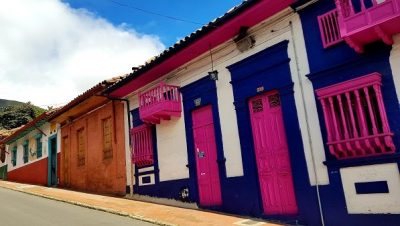 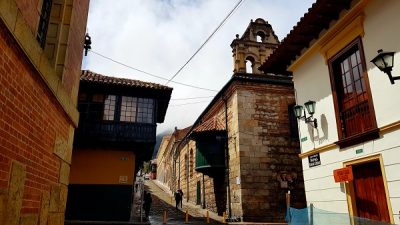 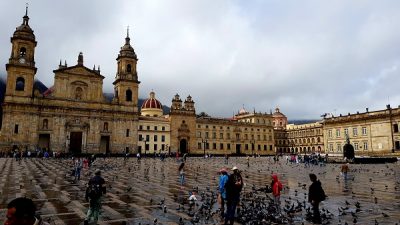 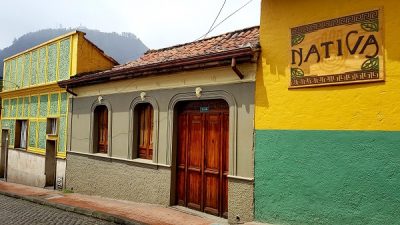 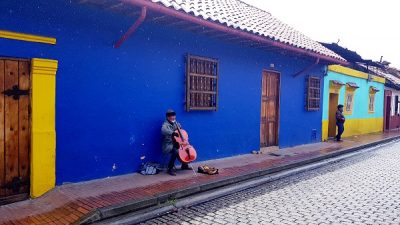 Why not begin where it all began, I thought, as I embarked on my exploration of Bogotá in Plaza Chorro de Quevedo which is the alleged spot of the city’s foundation in 1538 by a priest who built a communal fountain here. This square with a miniature Spanish colonial church is at the heart of La Candelaria, Bogotá’s cobblestoned, colourful historic centre that is now photographed to death. Unlike in the oldest parts of Montevideo, Uruguay, the houses in La Candelaria are beautifully restored and unlike in the colonial centre of Asunción, Paraguay, they are actually lived in.

There is plenty of detail in the houses’ windows and in the rustic style of their doors but they are essentially simple, one-storey structures. The houses are either rectangular or L-shaped with all the key markers of Spanish colonial architecture in place: adobe construction, vigas (protruding beams), portales (arcades) supported with thick columns and carved zapata capitals atop the columns. The main draw for photographers are the colourful facades and the uneven topography where no adjoining houses or streets are the same and where each view offers a variety of perspectives in single picture frame.

One of the most representative houses of this architectural style is Casa del Florero at the edge of Plaza Bolívar and across a narrow street from Bogotá’s main cathedral. Casa del Florero has it all – vigas, portales and zapata capitals plus a permanent exhibition of artifacts linked to Colombia’s independence from Spain. Legend has it that one local Creole, Antonio Morales, came to this late-16th-century home in 1810 and demanded an ornate vase from its Spanish owner. This apparently led to an altercation on the street and eventually a popular uprising against the country’s colonial masters.

And then there are the churches. They truly stand out against the rows of one-storey houses. In contrast to the understated houses, the Baroque churches have elaborate and symmetrical façades with curved parapets extending above the entryway, round arches, domes and niches for statuary. Their (often twin) bell towers derive from the Spanish Baroque of the 17th and 18th centuries. Unlike the humble rural mission churches, the interiors of these urban monuments show off Spanish colonial wealth: they are a riot of gold, intricate wood carving and giant Catholic statues and paintings.

But even the splendour of these churches pales in the face of the main Plaza Bolívar. The central plaza whose primary goal was to impress would have been built to specification as decreed by the colonial Law of the Indies. These were the “ground rules” from Spain for settlements far from home. Bogotá or Santa Fe de Bogotá as it was known then is thus laid out on a grid plan with a central plaza surrounded by important buildings with portales, from which the principal streets begin. Secondary plazas as well as narrow streets stretch out into the distance and, in the hot local climate, still provide shade today.

The gentrified La Candelaria is now also the beating heart of Bogotá’s arts scene. The art comes in two varieties – street and museum art. The former has proliferated in the streets of La Candelaria since the laws against graffiti were relaxed in Bogotá in 2011. The latter is an established institution through several museums, the most famous of which is Museo Botero, exhibiting the voluptuous figures, human and animal, of Colombia’s best-known artist, Fernando Botero. That alone would be a good enough reason for making La Candelaria your base in Bogotá.