Kyrgyzstan: The home of dictator chic, old and new 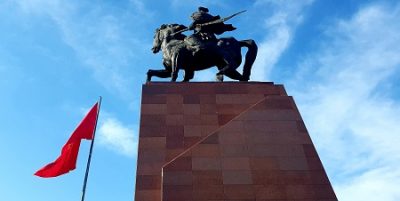 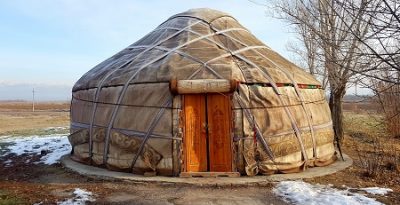 Kyrgyzstan: The home of dictator chic, old and new

Lenin – the cranky, reclusive and later embalmed leader of the Russian Revolution – who never actually set foot in Kyrgyzstan has some impressive footprint in Bishkek, the country’s capital. Blame it on a hangover from the Soviet Union which formally dissolved in 1991, but Bishkek’s expansive squares, dramatic monuments and brutalist architecture show how much Lenin and his communist ideology once mattered here. This you can not only see but also hear with Russian spoken by just about everyone, everywhere.

Although the giant bronze statue of Lenin himself which once graced Bishkek’s main Ala-Too Square has long been moved to a less prominent, if adjacent, location and replaced with the equestrian statue of Manas, a local folk hero, the Soviet leader’s ghost still lingers on here. The square’s concrete expanse, the massive flagpole, the neat marble-fronted buildings and the well ordered grid layout of the streets all around defer to the old Soviet power that has now given way to this new post-Soviet dictator chic.

There may be no national museum to honour a dear leader, but with no elections since independence in 1991 ever declared free or fair, you get the drift anyway. The Soviet-era Frunze Museum can easily fill this gap with its displays of propaganda and machine guns in celebration of Mikhail Frunze – the Bolshevik who gave Bishkek its pre-independence name. The museum is a time capsule of the (post-)Soviet times as is Bishkek’s cosmic-looking circus or the countless war memorials scattered all over the city’s parks.

With all of this secular aesthetic on view one can be forgiven for forgetting that Kyrgyzstan is also a Muslim state. The reminder comes with local food. The country claims to serve the best shashlyk in Central Asia and judging by Shashlyk No. 1, Bishkek’s superb grill, this may well be right. At Arzu, my other favourite and arguably the best restaurant in town, the local fare is augmented with excellent Russian food. Since in Kyrgyzstan all of this usually goes down with a cold beer, Islam be best left forgotten.

For my obligatory trip out of town which I insisted on reaching by marshrutka, I chose Burana Tower. This is a slightly leaning stump of a brick 11th-century minaret and all that now remains from the ancient city of Balasagun. Set against the backdrop of snowy peaks near Tokmok, a small town about 70km from Bishkek, the steppe site feels quite eerie and primordial even though it dates from a 1950s Soviet restoration. I climbed to the top through a dark spiral staircase and revelled in the haunting beauty of the place.

The gift shop on site was a yurt, that is traditional tent-like dwelling and one of the most essential parts of nomad Kyrgyz culture. As yurts go, it was made of birch poles tied to a frame with felt, wool and skins for outward walls. It was spacious but warm and cozy inside as I walked in from the icy steppe outside. The portable Kyrgyz yurt is a proud ancient take on DIY – and the ultimate modern symbol of freedom of movement. As a frequent traveller myself, I totally get the part where you just pack up and go.