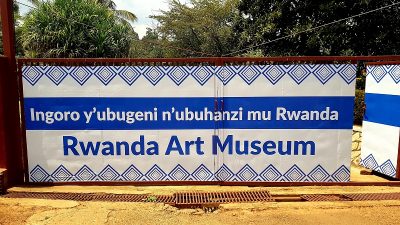 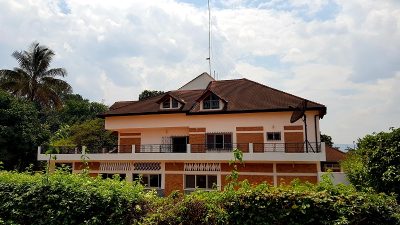 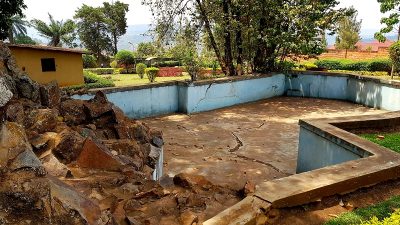 Tourist sites sometimes miss their purpose and what would once have been Rwanda’s most bizarre spectacle, the Presidential Palace of former dictator Juvenal Habyarimana, has sadly morphed into a sterile Rwanda Art Museum which now exhibits some of the most unremarkable art one can readily see on sale in craft markets and at traffic intersections all over Africa.

The palace is really a suburban mansion in Kanombe, a long boda-boda ride from central Kigali which I took in the hope of exploring Habyarimana’s original home. The dictator had apparently hired a French architect to design the house but would have taken over every design decision as can be deduced from the odious layout of rooms where a chapel is juxtaposed against a room where he practiced witchcraft.

Then there is a room that was apparently used for interrogation and torture of Habyarimana’s many victims alongside sensors strategically placed around the house to inform the watchful dictator if someone was walking through a certain corridor or traversing one of the numerous staircases. There is also a hidden weapons cache built into the television cabinet in the dictator’s entertainment room.

Habyarimana’s sense of paranoia is palpable throughout the house as well as outside where there is a custom-made pool for the dictator’s massive python, a gift from fellow dictator Mobutu Sese Seko of Zaire, whose job was to ward off evil spirits. This is a sight in its own right; indeed a caricature of itself. In a country where the majority lived in abject poverty, the dictator’s pet clearly lived a high life in its own lavish enclosure.

Even more bizarrely, behind the house is the debris of the dictator’s passenger jet that was famously shot down on 6 April 1994 and served as a rallying cry for the Rwandan Genocide. The plane oddly crashed in Habyarimana’s own backyard, killing all aboard, including the dictator himself. It also damaged the python’s pool, with the reptile managing to escape without a trace!

All of this makes for a hell of a story that provides a unique insight into the life of an archetypal African dictator. Sadly, the mansion has been cleared of all vestiges of Rwanda’s recent past to make room for a mediocre art gallery that tells us next to nothing about the country’s history. But in a country where remembering the recent past is so controversial and painful, this was perhaps inevitable.