In the bizarre world of Soviet hotels 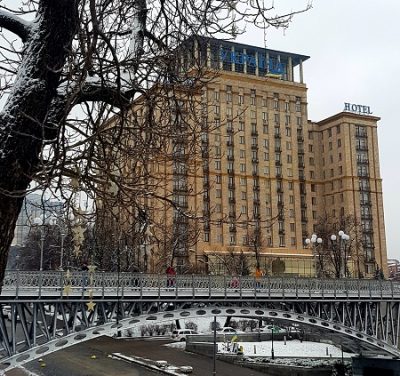 In the bizarre world of Soviet hotels

If, before 1991, you were looking for some action, which in the Soviet Union could only mean a bar drink or a restaurant meal, the only place in town you’d find it would be at a major, state-run hotel. In the USSR, each of its 15 constituent republics had a capital and each of these had at least one such hotel. They went by rather conspicuous names, such as мир (Peace) or grand city or country names like Москва (Moscow) or Украина (Ukraine). Such hotels were also, by the rigid communist standards, just a little risqué.

The air of scandal and excitement surrounding them was amply reinforced by James Bond movies and the like. It stemmed from the allure of these hotels as the alleged hotbeds of unofficial prostitution, burgeoning black markets with banned goods and hard currency, and KGB agents lurking in the cupboards or bugging subversive conversations between foreign diplomats. The sad truth probably was that such hotels were only reserved for senior communist party officials and that ordinary Russians weren’t even allowed in.

Architecturally speaking, these hotels were prime examples of Soviet megalomania which knew no bounds. Both during Stalin’s rush to urbanise locals and Brezhnev’s urge to impress foreigners, the Soviets would stop at nothing to build these gigantic structures. They tore down entire blocks and drained swamps to erect buildings that often came across as bleak and claustrophobic. Since 1991, many Soviet-era hotels have undergone refurbishment and some are now, with mixed results, in the hands of international chains.

So it was a given that for our nuclear family outing to Kyiv, I picked Hotel Ukraine. Built in 1961 as Hotel Moscow in the location of the city’s first skyscraper, the Ginzburg House, it’s now truly historic. In 1941, the skyscraper was remotely detonated by the Red Army in the largest terror operation in history to destroy one’s own buildings, by then under the German occupation. Our rooms on the 14th floor, by special request, overlooked Maidan Nezalezhnosti, the centre of Ukraine’s Orange and Euromaidan Revolutions.

In Almaty, the old capital of Kazakhstan where I travelled alone from Kyiv, I naturally landed in Hotel Almaty. Located along a typical tree-lined Almaty boulevard and across from the Stalinesque Abay Opera House built in 1934, the hotel is a postwar, boomerang-shaped concrete block, but no less imposing. I asked for a room overlooking the Alatau Mountains and from the hotel’s 8th floor I got to see the Almaty Tower, the 370-metre marvel of Soviet steel engineering pinned into the slopes of Kok Tobe hill.

The high point of my foray into the world of Soviet hotels came with Hotel Uzbekistan in Tashkent. A 1970s brutalist high-rise in the shape of an open book – a blend of European and Oriental styles, it’s a real beauty. Having hosted the power brokers of the USSR, its dour Soviet ethos still survives in its love of paperwork of all kinds. My 14th floor room may have been too much for water pressure but it also overlooked the vast Amir Timur Square so I never lodged a complaint. I may have had to do so in writing anyway.