In Bogotá, among Botero’s plump ladies 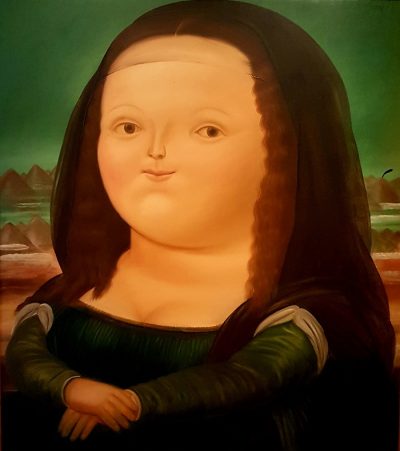 In Bogotá, among Botero’s plump ladies

A signature style, like any brand, sets artists apart and makes them instantly recognisable. By this definition, Alberto Giacometti’s haunting, emaciated statues are a brand. In direct contrast to them stands Fernando Botero’s signature style, called Boterismo. It is equally unmistakable, depicting people, animals and objects – dancers, horses and oranges – in exaggerated volumes and proportions. As such, Botero’s situational portraiture is loaded with satire – and some say – social commentary.

The place to see Botero’s work is in his native Colombia at a museum co-curated by the artist himself. In the middle of La Candelaria, Bogotá’s historic centre where the Spanish Colonial Baroque reigns supreme, Museo Botero is in the right location. The artist’s voluptuous and statuesque figures strongly reference Peter Paul Rubens and the Baroque tradition of obese female nudes, to which Botero also contributes obese nudes of 20th-century males. The results are consistently whimsical and grotesque.

Botero’s scenes are usually set in the small-town Colombia of the painter’s youth, with middle-class families, prelates, heads of state, soldiers, madonnas, prostitutes, domestic animals and still lifes with exotic fruit. The artist’s bulbous renderings are almost always of placid-looking people going about their lives, mostly of leisure. The settings are quaint, the colours are vibrant and the gargantuan figures are strangely sensual. By his own admission, Botero’s painting style strives for “the sensuality of form”.

Some have derided him for his attachment to figurative style and overwhelmingly positive – or at least placid – portrayal of Colombia’s reality, even at a time when the country and its people were suffering from violence and instability perpetrated by left-wing guerrillas and drug cartels. Others have suggested that Botero’s irreverent portraits of rotund figures are making a powerful statement about gluttony, materialism and over-indulgence.

In addition to Museo Botero, a much less representative collection of the artist’s work can be seen at Colombia’s sprawling Museo Nacional. Although Botero’s works on display here are small in number, they are set against the work of his contemporaries as well as Colombian art from the colonial era, all of which provides a valuable context. It is clear that Botero’s portraiture comes from a long tradition of depicting national life, even if the artist’s full-bodied aesthetic is his own invention.