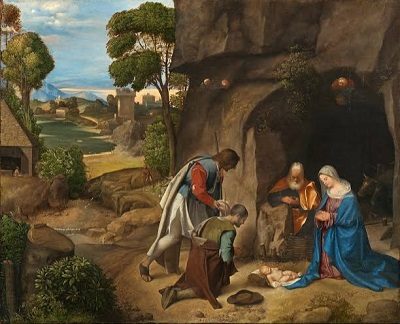 Venetian Renaissance painting has famously been plagued by mistaken attributions as research continues to identify individual masters’ hand and separate it from that of their pupils, followers, imitators, and others. In the case of my two great favourites – Portrait of a Venetian Gentleman and the Allendale Nativity, both of which hang at the National Gallery of Art (NGA) in Washington – the attribution of authorship has ping-ponged back and forth between Giorgione and Titian. The only thing that can be said with certainty is that both pictures are Venetian paintings from the early Cinquecento.

With the young man’s defiant stare, assertive posture and the mysterious setting, Portrait of a Venetian Gentleman is one of the most striking Renaissance portraits. Similarly, the Allendale Nativity presents a dramatic contrast between the bucolic adoration of Baby Jesus by the Shepherds, with the Holy Family very much in the margins, in between a dark grotto to the right and the bright landscape to the left. Both paintings have distinct echoes of both Giorgione and Titian and one is eventually resigned to conclude that they were probably begun by Giorgione and finished by Titian.

For starters, each painting has its fair share of Giorgionesque mystery. Like Giorgione’s iconic The Tempest, Portrait of a Venetian Gentleman raises questions about the composition – the sitter’s unusual stare and posture, the clenched fist, the green-covered book in the forefront and the cryptic “VVO” inscription. Similar questions arise from the unusual composition of the Allendale Nativity: traditionally, the Holy Family would occupy the centre of any devotional picture of this kind whereas here the Shepherds are the centre here with nearly a half of the painting being the landscape in the background.

Each of the two paintings is likewise representative of Titian’s early style which is marked by an uncanny attention to colour and light and contains an inner energy that has the power to keep viewers entranced. Like Titian’s Frari Assumption, Portrait of a Venetian Gentleman is a work in flux, emphasising mood, motion and forceful expression. By contrast, the bucolic adoration scene with the Holy Family set against the visual contrast of the cavernous grotto and the vivid landscape in the Allendale Nativity seems full of Titianesque light, colour, flowing brushwork and atmospheric tone.

To illustrate the issue of shifting attributions, American art historian Bernard Berenson identified Portrait of a Venetian Gentleman as a copy of a lost Giorgione before he changed his mind and said it was a Titian. In the case of the Allendale Nativity, Berenson went against the prevailing opinion of the day, which was in favour of Giorgione, to insist the picture was an early Titian. Today, the NGA officially lists Portrait of a Venetian Gentleman, somewhat alibistically, as a “Giorgione and Titian” and the Allendale Nativity as a “Titian”. Meanwhile, the battle of attributions rages on.