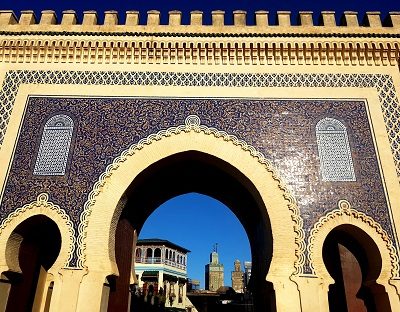 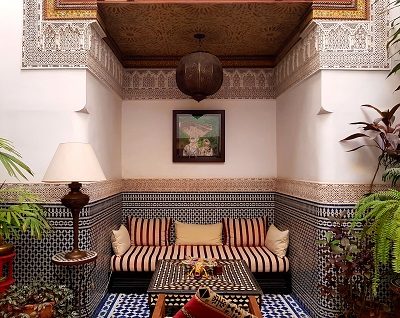 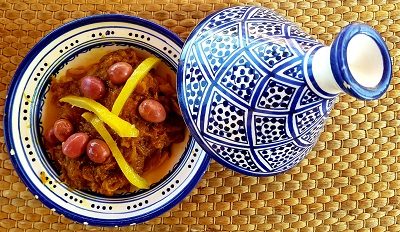 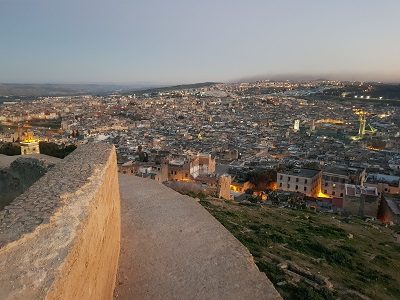 Fez, Morocco’s proud cultural capital, is said to have the best-preserved medina in the Arab world. This large maze of some 9500 streets is where its residents and Google Maps often get lost, never mind first-time visitors. My friend Cohen, who accompanied me on the trip to Morocco, and I braved these narrow and twisting mudbrick corridors past their vendors and donkeys piled high with all manner of goods, including animal hide destined for the tanneries and leather shops of Fez. As we trodded this vast, puzzling and car-free medieval town, we eventually transported ourselves where we needed to be, but also a thousand plus years back in time.

For an authentic Fez experience, we based ourselves in a traditional Moroccan riad. These are stately homes of merchants, usually with three or more floors wrapped around a roofed courtyard. At La Cheminée Bleue, the riad of our choice, an imposing wooden door separated a startlingly quiet world on the inside from the narrow but busy and noisy lane on the outside. Equally narrow passageways with neck-breaking stone steps then separated each of the riad’s four floors. And finally, wooden doors with very low doorframes, where Cohen would regularly bump his forehead, separated the narrow passageways from the more spacious rooms.

“The cooking class started off in the market where we shopped for ingredients – and watched our handpicked chicken being decapitated, an experience which drained blood from my face”

The smells and sounds of the medina would disappear completely whenever we entered this tranquil and airy sanctuary. The riad was centuries old and narrow stone staircase would take us, after a cardio workout, from street level to a roof terrace high above the medina. This was a perfect place to watch the sunrise and the sunset as the call to prayer bounced off the medieval rooftops all around. Like many other riads in town, La Cheminée Bleue is owned and managed by an enterprising mixed Moroccan/European couple, the likes of which have been changing Fez into a tourism hotspot and expanding the medina’s population of 150 000 permanent residents.

Unlike many other historic cities around the world – Venice, Prague or Dubrovnik – where mass tourism is pushing locals out into more modern and remote neighborhoods, there is still a thriving local population living in the Fez medina. Many of these locals make a living from guiding hapless tourists to and from their riads or working in the medina’s many tanneries, leather and pottery workshops or outdoor markets. The bustling streets without car traffic in daytime that become ominously quiet and eerie at nighttime make this ancient walled city feel like the biblical Jerusalem, to which Fez – Morocco’s historic capital until 1912 – is sometimes compared.

Some locals also teach cooking classes, as does the wonderful Samira whom Cohen found online and recommended further with a glowing review. We started off in the market where we shopped for ingredients – and watched our handpicked chicken being decapitated, an experience which drained blood from my face. Samira then, with lots of help from Cohen who is a trained chef and none from me, prepared a multi-course feast. The highlight of it was chicken tagine with olives and preserved lemons – my favourite in Morocco. We ate ourselves into a coma on the rooftop of Samira’s kitchen riad which took the entire medina to cross on foot back to our riad.

Two other memories of Fez stick in mind. One is the supremely photogenic Bab Boujeloud, the famous gateway into the medina. Its ornate mosaics are blue on outside to symbolise the colour of Fez, also renowned for its intricate blue pottery, and green on the side which faces the medina to represent the colour of Islam. The second memory is of the ancient Merenid tombs. These are giant tombs that sit on the hill above Fez and offer sweeping views of the medina just before sunset. The stillness rising above the city walls is surreal until it is pierced by the sharp call to prayer which is a reminder that Fez is not only a living city but very much alive.