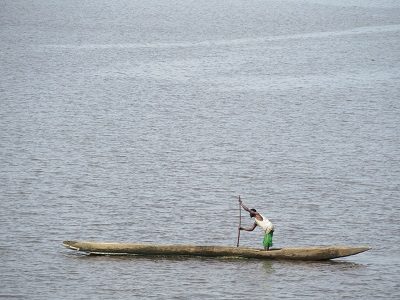 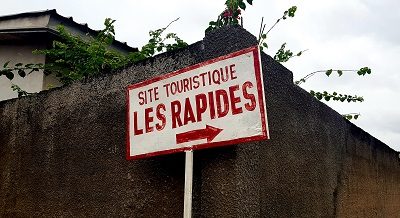 Between the capitals of the two Congos – Kinshasa and Brazzaville – lies a wide stretch of the Congo River that resembles a lake. This is Pool Malebo, formerly Stanley Pool, and the start of the navigable part of the Congo River some 4400km upstream. Downstream the river descends hundreds of metres in a series of rapids to reach sea level after a further 300km. The gushing torrents of water with the odd crocodile thrown in begin at the outskirts of the twin capitals where the lake-like widening in the river flows into a rocky bottleneck. Les Rapides, as they are simply known to those who have tried to scale them, are a force to be reckoned with.

This being the Congo River, the superlatives abound. It is the second longest river in Africa, to the Nile, and the second largest river in the world by discharge volume, to the Amazon. It is also the world’s deepest river, with depths in excess of 220m, although at Malebo Pool it is just under 10m deep. Its iconic representation on the maps shows that it is the world’s only major river to cross the Equator twice. It drains an area the size of Europe and remains a lifeline in the giant country with few roads or railways, with enduring images of large steamers, such as the one described in Joseph Conrad’s Heart of Darkness, working the river until recently.

Henry Morton Stanley, the Welsh journalist and explorer famous for his exploration of central Africa in the employ of Belgian King Léopold II and his dramatic search for missionary and fellow explorer David Livingstone, was the first European to explore the middle and lower Congo River in 1877. Stanley set out from the island of Zanzibar in the Indian Ocean and the entire journey took him 999 days. Of the original 356 men on his expedition, only 114 made it to the end. The last remaining European besides Stanley drowned in the final set of rapids, prompting Stanley to write: “I am weary, oh so weary, of this constant tale of woes and death.”

There probably isn’t a better description of the lower Congo River than Conrad’s in Heart of Darkness where it is “a mighty big river…resembling an immense snake uncoiled, with its head in the sea, its body at rest curving afar over a vast country, and its tail in the depths of the land”. Conrad is also aware of the river’s menacing presence: “The broadening waters flow through a mob of wooded islands; you lost your way on the river as you would in a desert … this stillness of life did not in the least resemble a peace. It was the stillness of an implacable force brooding over an inscrutable intention. It looked at you with a vengeful aspect.”

The Congo River, when you approach and cross it between the two cities in the rickety boat with a dubious safety record, is just as menacing today. Nowhere is this clearer than at the beginning of the powerful rapids where I took a taxi ride from central Brazzaville. Most people observe the rapids from the terrace of a shabby bar at Site Touristique Les Rapides, but the best viewing, as one kid explained to me for a dollar, is some distance away, past the bridge over the Djoué River, the Congo’s small but vicious-looking tributary. Here you can touch the river as those who run a car wash and a laundry service do right at the foot of the foaming rapids.

From here towards the Atlantic things reportedly only get worse. At Inga Falls, a rapid almost at the coastline, the Congo River drops some 100m over the course of 15km. Here the water rushes at 50km/h, several times the average flow of the Grand Canyon’s steepest section and 12m waves are not uncommon. These rapids are known for ending many an attempted descent in disaster. Whether death comes from the water or from the Congolese soldiers active in the area is uncertain. But scaling down the rapids, with no rescue infrastructure in place, would suddenly seem like a worse idea than tumbling down the Niagara Falls in a barrel.