Cheering the Nuba wrestlers in Khartoum 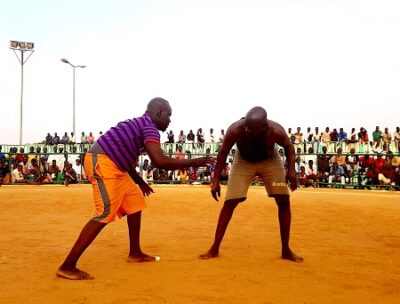 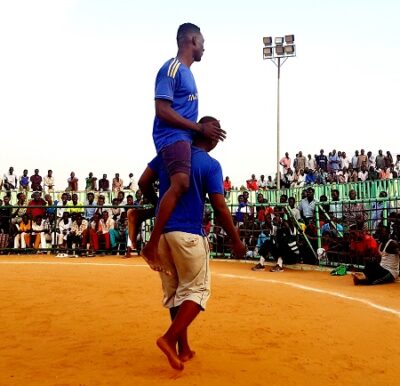 Cheering the Nuba wrestlers in Khartoum

The time is 5pm on a Friday and the place is the wrestling arena in Hajj Yousif on the eastern outskirts of Khartoum. The sun is slowly coming down and the scorching heat is giving way to breeze. The sand-filled ring is lined with spectators and the air is thick with anticipation. Two wrestlers circle one another inside the ring bowed forward, with their eyes locked and foreheads almost touching. The men wait for the perfect moment to lunge. The first match of the weekly Nuba wrestling tournament in Sudan‘s capital is on.

Nuba wrestling is a tribal practice from South Kordofan where it goes back thousands of years. Not just a sport, it’s a public display of warriors’ valour. The Nuba themselves are a diverse group of ethno-linguistic identities based in Sudan’s Nuba mountains near the border with South Sudan. There tribal wrestling still takes place in the open. Since the British colonial era, many Nuba migrated to Khartoum, bringing their tribal practice with them. Nowadays, ethnic groups other than the Nuba also participate in wrestling.

The rules are quite simple. The aim is to trip or dump your opponent onto the ground so that his back, torso or backside touch the ground. Your tactics can include distracting your opponent by tapping his head, tripping your opponent by grabbing his ankle or by sliding your leg underneath his leg or lifting your opponent’s body entirely and dumping him on the ground. Each wresting match lasts four minutes and is overseen by a referee. Punching, kicking and grapping clothes are not permitted and will get you disqualified.

Inbetween matches, it’s common for wrestlers to carry each other around the arena on their shoulders to the thunderous applause of the spectators. As a sign of mutual respect, sometimes the winner will carry the loser or the loser will carry the winner. When the Sudanese government embarked on its counter-insurgency campaign in the Nuba mountains region, tribal wrestling found a new home in this very arena in the country’s capital. In Khartoum, there are now eight wrestling clubs that compete at this venue.

The Nuba and their tribal wrestling was the focus of a sensational 1960s photo series by Leni Riefenstahl – a filmmaker who once worked for Hitler. Riefenstahl who revolutionised cinematography in her 1935 documentary about the Nazi Nuremberg rallies that took place one year before, couldn’t find work after 1945 due to her association with the Third Reich so she diversified into photography and set out for Sudan. Her coffee-table book The Last of the Nuba catapulted the tribe into a 20th-century cultural icon.